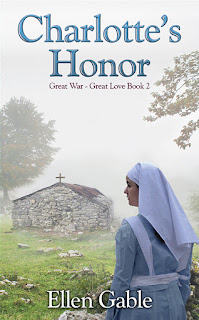 Today I am honored to be hosting the blog tour for Charlotte's Honor, the newest book by Catholic writer Ellen Gable.

Ellen Gable pens an engaging Catholic historical romance in her follow-up to Julia’s Gifts. Charlotte’s Honor, the second book in the Great Love, Great War series, begins in Soissons, France where Charlotte Zielinski is prepping soldiers for surgery during World War I.

When the hospital is bombed, she gets a shrapnel wound in her head which is treated by Dr. Paul Kilgallen. Paul is attracted to the young nurse, but as a classically trained violinist, he is tortured by her attempts at violin playing. He plans to confront her to tell her to stop playing, but then realizes she is mourning the death of one of her patients. Instead of chastising her, Paul ends up consoling Charlotte.

During an evacuation, Paul and Charlotte are thrown together again. The two refuse to leave the hospital, instead staying behind to care for the wounded me. In a tense moment, Paul kisses Charlotte, but after the danger has passed, he regrets that moment of weakness. Still grieving for a lost love, he strives to put emotional distance between himself and Charlotte. When Paul gets sent to the front, he has the opportunity to put physical distance between them as well. Charlotte decides that she’s going to love him anyway.

While Charlotte’s Honor is connected to Julia’s Gifts, both books work well as a stand-alone. Gable is skilled at creating the historical backdrop for the story: the world of a war that that took place a century ago comes live in these pages. Charlotte’s Honor is highly recommended for teens and adults who enjoy historical romance.

Ellen Gable is an award-winning author of nine books, editor, self-publishing book coach, speaker, publisher, NFP teacher, book reviewer and instructor in the Theology of the Body for Teens. Her books have been downloaded nearly 700,000 times on Kindle and some of her books have been translated into Portuguese, Italian, Spanish, and French. The mother of five adult sons, Ellen (originally from New Jersey) now lives with her husband of 36 years, James Hrkach, in Pakenham, Ontario, Canada.

May 1918
Vauxbuin Field Hospital
Near Soissons, France
The air was thick with the mineral stench of blood. Inside the canvas tent that served as Barrack Number 48, Charlotte searched for a place in the unconscious soldier’s body to insert the hypodermic.  The poor gentleman had burns and wounds everywhere, but she managed to find a one-inch diameter spot on his thigh in which to plunge the needle.  The man didn’t flinch, and Charlotte suspected that his injuries were too grave for him to survive.  She recited a silent prayer for this man’s soul, then moved onto the next soldier.
The large canvas tents that were part of the field hospital covered the lawn in front of the chateau. Most volunteers referred to it as a chateau because it looked the part with its high ceilings, plentiful rooms and marble floors. However, it wasn’t a castle. It was a 19th century country manor.
A tendril of dark brown hair slipped from her headscarf, and she tucked it back in. Charlotte Patricia Zielinski didn’t care much whether her unruly hair was tame, but she did care about keeping healthy. She wasn’t a large girl, nor was she small.  However, roughhousing with her brother Ian for so many years made her strong.
After preparing another soldier for the operating theater, she took a short break and sat on a bench near the tent.
She glanced up at the dark sky, enjoying the quiet. After the sunrise, she’d hear the distant booming that came with being ten miles from the front.
After her bout with influenza last month, she’d felt fatigued for weeks.  In the past few days, she had enough energy to move a mountain.
Sister Betty, the medical volunteers’ middle-aged supervisor, called to her from the barrack beside her, Number 49.  She was a big-boned woman who seemed taller because she always stood so straight.  Charlotte wasn’t sure whether it was because she was British or because she was a big woman, but she also had a booming personality and a loud voice.
Charlotte stood up to speak with Sister.
“How many more men have to be prepared for the O.R., Miss Zielinski?”
“Four, Sister.”
“Maybe you’d be of more use in this barrack.” She pointed toward Number 49.
“Certainly.”  She turned to alert her co-worker in 48, when Sister yelled, “Wait.”
Charlotte stopped. “Yes?”
“Perhaps you’d better stay where you are. If there are only four left to prepare, finish that duty, then report to this barrack.”
“Yes, ma’am.”
It took a bit of getting used to, but here in Europe, nurses were referred to as sisters.  And all sisters – and most medical volunteers – wore headscarves that looked like habits.
She approached a soldier on a cot, noticing the maple leaf on his collar. Canadians tended to be an agreeable bunch.  He pursed his lips as she stripped his clothes, wincing as bits of skin came off with his pants.  The poor fellow tensed, but Charlotte could only offer, “I’m so sorry.  I am doing my best not to hurt you.”
The dark-haired man attempted a smile.
An ear-piercing explosion caused the world around Charlotte to vanish, and she reflexively collapsed on the cot, falling across the soldier lying in front of her. Ears ringing, she remained still for what seemed like an hour but was likely a few minutes. Blinking, she opened her eyes and stared at the metal side of the cot in front of her and felt the soldier moving underneath her.
As she lifted herself up, not one but three large drops of blood splattered the white sheet below her. Her head seared in a flash of pain.
When the Canadian soldier took hold of her hand, he said something she couldn’t hear.
His warbling soon became words. “Are you all right, Miss?”
Her mouth was open, but she couldn’t speak.  Nodding, she raised her hand to her headscarf.  When she pulled her hand to her face, it was covered in blood.  Jesus, Mary, and Joseph.
“Are…you all right, sir?”  Charlotte asked the man.
“Yes, no worse than I was.  Thanks to you, Miss.  You shielded my body with yours.” He paused. “You have a bad shrapnel wound on your head.”
“Y…yes.”  Charlotte winced but forced a smile. She turned and picked up a bandage from the side of the overturned cart. She pressed it to her head.
By this time, the entire ward was awake and bustling with moaning soldiers.
Standing up, her surroundings seemed to shift and sway, so she reached for the soldier’s hand. “I’m so sorry.”
“Think nothing of it.  I’m happy to reciprocate.”
Glancing just above the soldier’s head, she spotted five or six holes the size of watermelons blown through the side of the barrack’s canvas wall and hundreds dotting the rest of the walls. Following the holes from the side wall to the ceiling, she stared upwards at the roof of the tent, now shredded in many places.
A few soldiers near the wall had sustained minor injuries, but no one appeared to be mortally wounded.
Panicked and fearing the worst, Charlotte rushed outside, the bandage still to her head. As she turned toward the adjacent barrack, she stopped and gasped. The influenza ward was no longer there.  Body parts, blood, torn-apart furniture, and bits and pieces of the barrack were all that remained.  The realization that she had escaped death made her knees buckle.
She blessed herself and lowered her head. “Requiescants in pace.”  Her hearing had not yet fully returned, but she could hear someone call her name.

Posted by Patrice Fagnant-MacArthur at Tuesday, October 23, 2018 No comments: