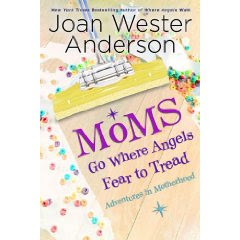 Moms Go Where Angels Fear to Tread: Adventures in Motherhood

Joan Wester Anderson,
New York Times best-selling author of "Where Angels Walk," has turned her attention to motherhood in "Moms Go Where Angels Fear to Tread: Adventures in Motherhood." Anderson is the mother of five grown children. As such, she has much wisdom and experience to impart to those of us still in the trenches. For example, "If you rely on God's help and second on your own good instincts, you'll be happier for it."

Anderson regales her audience with humorous tales of her own experience of motherhood that will have fellow mothers nodding and laughing in agreement. Anderson tackles such topics as attempting to remodel a house, the stress that is the month of February (how can such a short month cause so much trouble?), sending children to school for the first time, taking children to the doctors only to have them be miraculously healed in the waiting room, and watching a child perform onstage for the first time. Anderson concludes each chapter with a wise quote regarding the topic at hand. One of my favorites was from Father Ron Rolheiser: "A mother rearing children . . . is forced, almost against her will, to constantly stretch her heart. For years, her time is never her own, her own needs have to be kept in second place and every time she turns around a hand is reaching out and demanding something. She hears the monastic bell many times during the day and she has to drop things in midsentence and respond, not because she wants to, but because it is time for that activity and time isn't her time, but God's."

"Moms Go Where Angels Fear to Tread" is an enjoyable romp through the experience of motherhood. It will both make you laugh and tug at your heartstrings.

This looks like an interesting read. Thanks for the recommendation.