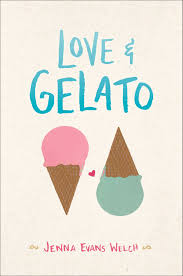 I'm a big fan of bestselling author Richard Paul Evans' books. I'm always sure to read his latest book and I look forward to his Christmas stories every year. On Facebook lately, he has been promoting "Love & Gelato," the first novel by his daughter, Jenna Evans Welch. I didn't know whether to attribute this to a father's pride or whether the book was actually any good, but I decided to give it a try.

This was my fun read for the Memorial Day holiday weekend and it was so worth it. It is a young adult romance, but can be enjoyed by anyone. After her mother's death from cancer, she is sent to Italy to live with a father who never knew she existed. When her father's friend gives her a journal that her mother kept when she was young and in Italy, Lina discovers a boatload of her mother's secrets. She sets out on a quest to discover the truth about her own beginnings with her new friend Lorenzo helping her with her search.

"Love & Gelato" is a delightful book, perfect for light summer reading. Part romance, part mystery, it will keep you turning pages and make you want to travel to Italy.


Posted by Patrice Fagnant-MacArthur at Monday, May 30, 2016 No comments: 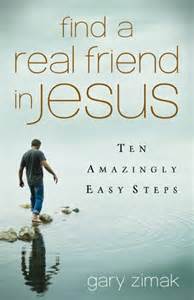 “Find a Real Friend in Jesus: Ten Amazingly Easy Steps” by Gary Zimak could as easily have been titled “The Catholic Guide to a Personal Relationship with Jesus.”  Catholics often think of a personal relationship with Jesus as a Protestant idea, but Jesus wants to be close to all of us and not just in our times of need. Jesus “wants us to turn to him when we’re not in trouble. . . . Once you start speaking to him more and spending time in his presence, he will share more of himself with you.” Jesus is always there waiting, but “he will not force himself into our lives. It is up to us to answer the door and invite him in.”

Zimak offers a roadmap of how to invite Jesus into our lives. He begins by discussing the elements of an personal relationship. These include things such as self-sacrifice, commitment, honesty, time together, admitting mistakes, and having a sense of humor. He then discusses how much God loves us and the Jesus wants and is able to be our best best friend. “Jesus desires our love.”

He then lists the “ten steps that will change your life,” the ten ways to cultivate a relationship with Jesus within a Catholic framework.  Some topics include getting over the roadblock of not being able to physically see Jesus, the importance of listening to what the Church has to say, the value of prayer and the sacraments, the need to read the Bible, why Eucharistic adoration matters, and how to love our neighbor. Each chapter includes useful summaries recapping the important points of that section.

Zimak, a full-time Catholic evangelist and author, has a great enthusiasm for Jesus that comes through on every page. He wants others to discover the joy that he has found in cultivating a relationship with Jesus, a life-long process. If one follows the steps outlined in “Find a Real Friend in Jesus,” one is sure to develop a better understanding and closeness to Jesus. The more we turn our lives over to Jesus, the more our lives will change for the better, and the more we will become more Christlike. It is a goal worth striving for.

Posted by Patrice Fagnant-MacArthur at Monday, May 23, 2016 No comments:

Blog Tour - Learning to Love with the Saints by Jean Heimann 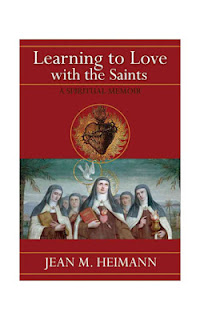 Today I'm honored to be part of the blog tour for Learning to Love with the Saints by Jean Heimann.

In "Learning to Love with the Saints," Heimann shares her "own love story with the Lord and shares how the saints have influenced her in her perception of love over the years." Part memoir and Part "Life of the Saints," Heimann tells the story of her life while incorporating the impact of certain saints who shaped her understanding at different times in her life. St. Therese, St. Pope John Paul II, Blessed John Henry Newman, and St. Sharbel are all featured.

Heimann, also the author of "Seven Saints for Seven Virtues," shares the ups and downs of her life with honesty as well as with the perspective looking back at a lifetime can provide. She tells of her failed relationships with men and of her time away from the Church, as well as what brought her back to the faith and what taught her what love and marriage should entail. She also shares stories of her family of origin and her own struggles with health.

At its heart, "Learning to Love with the Saints" is a spiritual memoir of how God has worked in Heimann's life. Her story is a worthy addition to the genre, bearing testimony to how God loves each one of us and works in our lives to bring us close to Him.

Purchase the book on Amazon and help support this site:

For other stops on the blog tour, please visit:

Wednesday, May 18 -- Esther Gefroh., Review, A Catholic Mom in Hawaii


The following is shared on behalf of Michelle Buckman, a Catholic fiction writer I have great respect for.

CHRISTIANS: WHERE DO WE GO FROM HERE?
The only thing necessary for the triumph of evil is for good men to do nothing.
-Edmund Burke
Evil is triumphing because good men didn’t do anything. No one would listen in 1994.
Government controlled healthcare has resulted in almost all healthcare providers being hooked into huge corporate conglomerates. Homosexual marriage is not only valid, but forcing Christians to participate through their businesses. Baby parts are being sold for big profit. Transgenderism—where is that headed? And at the root of it all, Christianity being attacked and systematically destroyed, or at the very least, stymied. Anything Christians speak against is railed at as being racism or bigotry, while every other religion is given free reign. Tolerance is only for the immoral.

The pathway to this free-for-all was visible in the ’90s for those willing to stop, look, and listen.
Back then (1996), there was a push for the Defense of Marriage Act (DOMA). People acted like it was no big deal. Why, they asked, do we need to defend marriage? It’s been around since the beginning of time? What’s to defend?

Back then, no one was challenged for being Christian. Transgenderism was an odd mental condition that few people even pondered; the actual physical condition of people being born with more than one set of genitals so rare that it was an anomaly, and certain not something discussed in daily conversations.

Back then, the one issue that was being discussed was abortion, legalized twenty years earlier and growing in numbers as the agenda was pushed in schools and every forum possible as being for the safety and benefit of women, to protect girls from suffering back-alley procedures and from the mental stress of raising unwanted children.

I was a young mother at the time, very attuned to the political ramifications of issues at hand and appalled that no one could see what was coming. So, I wrote a book about where we were headed: Death Panels.

Back then, the book was titled Liberty because that’s what it is about—people remembering that the value of our country lies in our extraordinary liberty, and how political agenda was bent on first restricting and then destroying the fantastic liberty on which our nation was founded because the plan to thwart the domination of Christianity was already underway.

When I wrote DeathPanels, I did my best to make everything as farfetched as possible. I wanted to shake people up enough that they would consider where the various pushes against Christianity could lead. Unfortunately, I was a new author and after one publisher’s acceptance that ended up falling to rejection in favor of another book, I abandoned the manuscript until 2008, when Obama was elected. I presented it to Tan Books / St. Benedict Press and it was bought and published in 2010.

Now, six years later, many aspects of the story have come true, or can more clearly seen as the end result of our current path. You’ll see, this isn’t about hating anyone. It’s about loving people, but not embracing their sins as normal, acceptable behavior.

Read it. Think it through. Pass it on.
Stand firm in your beliefs.

Posted by Patrice Fagnant-MacArthur at Tuesday, May 17, 2016 No comments: