The Truth About Purgatory 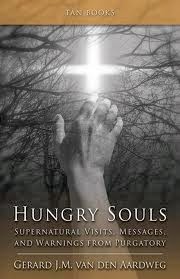 I’ve wanted to read HungrySouls: Supernatural Visits, Messages, and Warnings from Purgatory by Dr. Gerard J.M. van den Aardweg for quite some time. I was therefore very excited to see that someone had generously donated it to our Parish Library. I read it in one afternoon and my enthusiasm to read this book was not disappointed.

I’ve had an interest in the after-life and what has been revealed about it for a long time. Even as a young girl, I was familiar with the stories of near-death experiences, plus I was steeped in the Catholic teachings of heaven, hell and purgatory. What comes after this life, which by comparison is but a blink of an eye compared to eternity? I have read many books about near-death experiences and the difficulties inherent in describing a reality that we earthbound humans don’t have words to convey.

Many describe an incredibly positive experience, filled with pure love and light and colors and music more vibrant than any we have ever experienced. Others describe meeting with long-lost loved ones who appear in the prime of their lives – young and filled with joy. Still others have encounters with children lost through miscarriage who have continued to grow on the other side of eternity. One can presume that these individuals were privileged to have a glimpse of heaven.

Others, not so fortunate, have experienced darkness and hate and pain. They saw a vision of hell and were blessed enough to be sent back to have a chance to redeem their lives.

But what about purgatory? Saints such as St. Faustina, St. Catherine of Genoa, and St. Padre Pio have seen visions of purgatory and/or been visited by souls in purgatory, so I knew that it was real. I’ve heard it described as both intense pain, due to the purgation of sin, and intense pleasure, due to one’s knowing one was definitely going to heaven. I also knew it is important to pray for those in purgatory in order to help alleviate those souls’ suffering. Still, I always wondered, why do none of those who come back from the dead ever speak of purgatory?

Hungry Souls answers that question and many more. It shares the stories of many individuals who have encountered souls in purgatory, who have been allowed by God to visit earth and ask for prayers and sacrifices. These souls describe getting to see heaven and then being sent to a time of purgation. Part of the pain of purgatory is knowing the beauty of heaven and having to wait to return there. Those who have near-death experiences and return to this life never reach that point. They only have the initial contact with heaven.

Meanwhile, purgatory has several levels that souls pass through depending on how much purification the soul requires. Those farthest away from heaven are in the most pain, while those closest experience great joy. These souls can also be helped immensely by our prayers and sacrifices offered for them. We must not forget those who have died before us. In turn, these souls can help us on our earthly journey as well.

Many of those who have had visits from souls in purgatory have tangible evidence of that fact. Hungry Souls includes photographs of other-worldly burn marks that have been left by these souls on prayer books and clothing. Some people even have burn marks where they themselves were touched by these souls.

I can’t recommend this book enough. Purgatory is real, and we should live our lives in such a manner as to try to avoid it, while at the same time, offering prayers and sacrifice for those who are currently in that state. God wants to pour out His mercy on humanity, but we need to ask for it, for ourselves, and for those who have gone before.