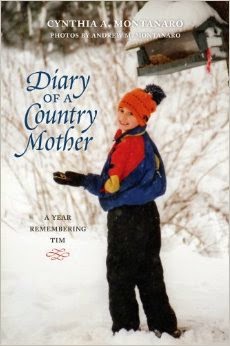 Diary of a Country Mother

Cynthia Montanaro wrote "Diary of a Country Mother: A Year Remembering Tim" in order to “reveal that each person, no matter his mental or physical problems, has a great worth beyond measure and leaves an enormous impact on those near to them and on those farther afield.”

She begins the diary December 8, 2005, the feast of the Immaculate Conception, six months after her son Tim died. Tim suffered from Tourette Syndrome and obsessive compulsive tendencies. He died by his own hand at the age of fifteen, but Montanaro does not view it as a suicide. She does not believe that he intended to cause his death. She writes, “I do not imagine he had any idea that his actions would result in the finality of death. I view his last compulsive act as an unpremeditated action that ultimately had a tragic ending.” It’s this belief that allows her to trust that her son, if he is not there already, will ultimately be united with God in heaven.

This book is not so much about Tim’s death as it is a celebration of his life. In many ways, it is the act of a grieving mother, struggling to make sense of all she has been through, and in doing so, striving to give hope to others. Montanaro wants all people, especially young people, to “value the life God has given them.”
Montanaro’s writing is beautiful and meditative and hers is a life filled with faith and trust in God, even in the darkest hour. The book is filled with family photographs of Tim and his older brothers which add to the narrative.

I recently read “Trusting God with St. Therese” by Connie Rossini. Rossini speaks of reading this book and how it helped her find meaning and peace after a friend had also lost his life to mental illness. It helped her trust that the devil doesn’t get the last word. Even if that one person was the only one who this book helped, “Diary of a Country Mother” would be a success. This is a touching, heart wrenching book about the value of life.