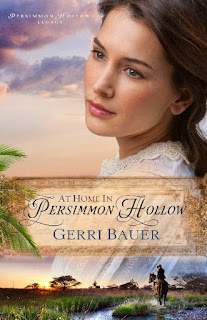 Today I have a pleasure of being a stop on the blog tour of Gerri Bauer's new book, published through Franciscan Media, At Home in Persimmon Hollow.

Below, Bauer, a fellow member of The Catholic Writer's Guild, shares her thoughts on the differences between Catholic and Christian fiction, and what makes a work of fiction "Catholic." It is a difficult question that continues to be up for debate. With some works, the answer is obvious; other times, not so much. In any event, Bauer's work clearly falls into the Catholic Fiction category.

I spent an enjoyable weekend reading At Home in Persimmon Hollow. Set in 1886 in Florida, it follows the adventures of Agnes Foster, who has come to be the new schoolmistress of Persimmon Hollow. On the journey there, she offers to chaperone young Billy, who is traveling to the area on his own. Doing so means she must contend with his Uncle Seth, who at first glance, comes off as an unfriendly brute of a man.

Agnes has come from a Catholic orphanage in New York. Forced to leave due to an unfortunate set of circumstances, she is eager to do whatever she can to help the financial situation of the orphanage. She also left behind her soon-to-be-adopted daughter Polly who she misses very much. In her new situation, Agnes must adjust to life on the frontier with its new people, new circumstances, and communal religious meeting hall.

The first book in a series, At Home in Persimmon Hollow is a light romance, perfect for those days when you simply want to relax and enjoy some reading.

The Christian romances I’ve read have a Protestant worldview. With the exception of Amish novels, characters tend to be nondenominational. In a Catholic romance, the faith tradition comes to the forefront. The heroine’s faith governs her life and guides her actions. Readers learn about Catholic rituals and practices.

Beyond romance, the lines aren’t always as obvious to me. I’m thankful for guideposts, such as a novel being an imprint of a Catholic publisher like Franciscan Media (disclosure: that’s my publisher). A book can be expressly noted as Catholic by carrying a seal of approval by the Catholic Writers Guild, of which I’m a member. Yet a novel that doesn’t carry the seal, or doesn’t roll off a Catholic press, can still be authentically Catholic.

From a religious perspective, all Catholic fiction is Christian. The reverse isn’t always true. Priests, nuns, the Eucharist, or Confession may never grace the pages of a novel otherwise considered Christian.

Sometimes, an author’s faith casts a halo over his or her works. Flannery O’Connor is considered a “Catholic author.” I return to her works periodically with an eye out for the Catholic influence. Yet she resisted describing her fiction as Catholic or Christian. On page 290 in the Vintage Books’ 1980 edition of The Habit of Being, a collection of her letters, she makes two important points about Catholic fiction:

·         Instead of using a specific Catholic setting or story, O’Connor says, “What must be unquestionable is what is implicitly implied as the author’s attitude.”
·         Also, she writes that good Catholic fiction “is a matter of getting across the reality of grace.”

O’Connor is a literary author, not a genre writer. My opinion is that faith-inspired story elements and character actions matter in genre fiction. For example, characters in a Catholic or Christian romance won’t have sex outside of marriage. Graphic violence won’t show up on the pages. Literary writing allows for more ambiguity.

The distinction between Catholic and Christian fiction may come down to the worldview of the author, as with O’Connor. Or multiple labels may apply, as with C.S. Lewis. Wikipedia assigns his works to the genres of fantasy, science fiction, children’s literature and Christian apologetics.

But I don’t see a clear-cut answer, and I look forward to hearing reader’s opinions.

Gerri Bauer is the author of the Catholic historical romance At Home in Persimmon Hollow. Find her on Facebook at Gerri Bauer – Author, on Twitter @GerriBauer and on Pinterest at Gerri Bauer.

Thanks, Patrice, for inviting me to your blog!

My pleasure! Wishing you all the best with the book!

Looking forward to reading this book!