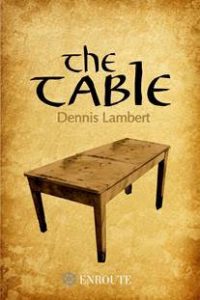 The Table
by Dcn. Dennis Lambert
A table built by the grandfather of Jesus Christ…
Protected for centuries by a line of table bearers…
Encounters a man in his time of greatest need.

A Little About Dennis Lambert
Dennis Lambert and his wife Debbie live in Phoenix where he serves as a Deacon in the Roman Catholic Diocese of Phoenix.   A graduate of Lake Forest College and the Kino Catechetical Institute, Dennis recently retired from a twenty nine year career in the pharmaceutical industry in order to dedicate more time to writing and to serving the Church.  In addition to his passion for writing, Dennis and his wife share a deep love of music and have performed together in bands, both in the Chicago and Phoenix areas, for almost three decades.

A LITTLE ABOUT  THE TABLE
First century Christianity and present-day musical aspirations meet in the story of a miracle table built by the grandfather of Jesus Christ.  The table is placed in the hands of a Centurion named Cornelius following the death of the Messiah. Given the title of table bearer and a mission, Cornelius begins a history of bringing peace to those who encounter the table, a mission that will be sustained for over two thousand years.  In the later years of that mission, the table and its current bearer, an autistic young man named Anthony, encounter Michael Fortunato.  At the very moment of his breakthrough in the music industry, Michael loses the only thing that really mattered to him, his wife Debbie. The loss sends Michael into the center of darkness which he seemingly can’t escape. That is until he meets Anthony, a table, and a story that is over two thousand years old.

A LITTLE ABOUT THE PUBLISHER
En Route Books and Media is a Catholic publishing company based in St. Louis which specializes in all genres of Catholic literature. Being the outstanding publisher they are, En Route donates 10% of all profits to Pro Life causes!

A LITTLE ABOUT WHAT OTHERS HAVE TO SAY ABOUT THE TABLE

Purchase this book through this Amazon link and help support this site: http://amzn.to/2xkBnEe