An Inspirational Football Story about a Female Coach in WWII 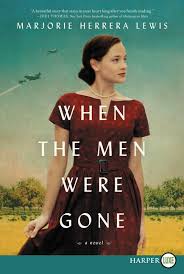 This weekend’s leisure reading was When the Men Were Gone by Marjorie Herrera Lewis. Lately, there has been a great increase in the number of works about little-known women who changed history in both big and small ways. I enjoy reading about these historical figures and learning their stories.

This tremendous story of courage and perseverance features Tylene Wilson who became a high school football coach during World War II. She learned the game of football from her father when she was a little girl and had a lifelong love of the sport. In 1944, she was Assistant Principal of a high school in Brownwood, Texas. When the coach leaves to fight in the war, there is no one left to lead the team. Tylene tries to find a male, any male, to coach but none are willing.

The general feeling is that the season should be cancelled, but Tylene knows that football is the only thing standing between the seniors and signing up early for the fight. She knows that they will most likely need to go to war, but she wants to give them one last year before they have to face that battle. Desperate, she takes it upon herself to coach, facing a great deal of opposition in the process.

The author, who was deeply inspired by Tylene’s story, has been a beat writer for the Dallas Cowboys as well as a member of the Texas Wesleyan University football coaching staff.

This is a short book, perfect for enjoying in a weekend (I love those kinds of books!). If you enjoy football or inspirational stories of courageous women, you’ll enjoy When the Men Were Gone.
Posted by Patrice Fagnant-MacArthur at Sunday, November 18, 2018