The Catholic Guide to Depression 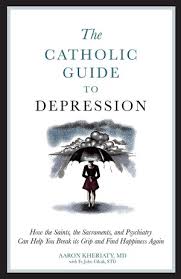 Depression is one of the most common mental illnesses and Catholics area far from immune. The Catholic Guide to Depression: How the Saints, the Sacraments, and Psychiatry Can Help You Break Its Grip and Find Happiness Again by Dr. Aaron Kheriaty with Fr. John Cihak, STD offers a much needed guide to navigating this painful illness from a Catholic perspective.

Symptoms of depression include an inability to focus, seeing the world through a negative lens, changes in sleep patterns (insomnia or excessive sleep), low energy, inappropriate feelings of guilt, an inability to find joy in activities, anxiety, and/or frequent thoughts of death. All ages are at risk.

Some Catholics may feel that all depression has a spiritual cause; that if one simply prayed enough, believed enough, etc. the symptoms would go away. Dr. Kheriaty assures that is not the case. Many cases of depression have physical causes. Included in this category are those with brain chemical imbalances, those who suffer from seasonal depression, and those in the midst of post-partum depression. By the same token, not all depression is caused by physical ailments, and may indeed have a spiritual dimension. Very often, depression is caused by a combination of factors and a fruitful course of treatment will treat both body and soul.

Dr. Kheriaty offers a historical overview of depression and how it has been treated. He acknowledges the reasons many Catholics have felt suspicious of psychiatry due to Freud and Jung being very anti-religious. By the same token, he emphasizes the positive role that a competent psychiatrist or psychologist can play in treatment. He also states that it is not necessary to find a Catholic psychiatrist or psychologist. Rather, the important factor is whether he or she is skilled and respectful of their patients’ religious beliefs.

Dr. Kheriaty also approaches depression from a Catholic standpoint. He acknowledges the role of suffering in the Christian life, that “it is something used by God to bring the disciple into closer union with him.” He compares and contrasts depression with the dark night of the soul. He also explores the importance of the virtue of hope.

No discussion of depression is complete without a conversation about suicide. Those suffering from depression often contemplate suicide. Dr. Kheriaty has a compassionate view of those who have lost the will to live. “This view of suicide as a ‘solution’ to suffering is of course a life, a trick of the diseased mind, but one that is easier to believe when in the throes of serious depression.” He encourages people to take any talk of suicide seriously and offers suggestions of what to do if someone is threatening suicide. From a Catholic standpoint, he emphasizes that mental health issues “can diminish one’s responsibility or culpability for suicide” and that we must pray for those who have committed suicide and entrust their souls to God’s care and mercy.

While any treatment plan should be undertaken under professional care, Dr. Kheriaty does discuss various types of medical intervention. He also recommends physical exercise, regular routines, and social interaction (which are good suggestions for everyone’s mental health). Appendices include resources for further reading, prayers in time of distress, and an address of Pope St. John Paul II on the theme of depression.

The Catholic Guide to Depression is a valuable guide for those suffering from depression, as well as for those who love someone who is suffering. The most important take-away is that both spiritual and physical help is available and that patients need not suffer without treatment.

If you or someone you love are contemplating suicide, please contact the National Suicide Hotline: 1-800-273-8255. You can also contact a crisis counselor by texting HOME to 741741.
Posted by Patrice Fagnant-MacArthur at Friday, July 05, 2019

Hey!! Thanks for the post. Mental health disorder like depression really ruin your life completely. I know this because I gonna through this horrible state of mind. To over
come the depression I searched for the best Counsellor In South West London. Finally, I get rid of it. Hey! you have shared really a great post.