Our Lady of La Salette Chapter Three The Bishop Speaks 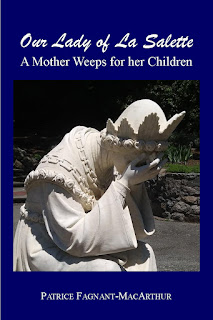 Our Lady of La Salette: A Mother Weeps for her Children is Available on Amazon


Bishop Philibert de Bruillard was 81 years old. He had been ordained at the age of 24 and then served as a professor of philosophy and theology at the seminary of St. Sulpice in Paris. During the French Revolution, he had continued to minister in secret. Later, he served as a parish priest before being consecrated as a bishop. By the time of the vision of La Salette, he had been the pastoral leader of Grenoble for 25 years.  He was known as a man of “sterling faith” and “notable piety”.[i] Fr. Mélin had no doubt that the bishop would take the matter seriously and conduct a thorough investigation.
Upon receiving Fr. Mélin’s initial letter, the bishop sent a letter to all the priests of his diocese forbidding them from speaking or publishing anything about the vision until he or the Vatican made a decision regarding their authenticity. Despite this imposed silence, word of the vision was spreading. Fr. Mélin kept up a steady correspondence with the bishop regarding the events in Corps and La Salette, but so did many others. The bishop had a pile of letters from both officials and common people; everyone had an opinion of what he should do.
In mid-October, Bishop de Bruillard chose several of his most trusted advisors to investigate. Father Chambon was superior of the minor seminary. He was accompanied by three members of the seminary faculty. The bishop expected a full report in his hands by November 10th. He then appointed two commissions to sift through all the information he had received. One was made up of eight canons of the cathedral. The other was comprised of six professors of the Grenoble major seminary. They were to operate independently of each other and offer their own evaluation of the material.

While the bishop was investigating and mulling over the situation, the local people took matters into their own hands. Many began to make pilgrimages to the mountain where the vision took place. Melanie and Maximin were never left in peace. Everyone wanted to speak with them. Many offered them money (which they always refused). Maximin’s father began to be interested in getting to the bottom of what had happened to his son, especially after Maximin told him that the lady had spoken of Giraud as well. Maximin’s grandmother wanted to make the trip to the mountain and his stepmother asked for permission from Giraud to go with her. He agreed, directing his wife to look carefully to see if there were any signs that the children might have been tricked in some way.
When she returned, Giraud’s wife spoke favorably of the location and urged her husband to go see it for himself. Perhaps he could even be cured of the asthma that he suffered from. At first Giraud would not commit to going, but he freely allowed his son to return. He even made a wooden cross at Maximin’s request that his son wanted to put on the mountain. A short time later, Giraud did make the journey. He prayed for healing and drank some of the water from the spring. He experienced a complete conversion. Not only was he physically healed of his difficulty in breathing, he began to practice his faith with all his heart. Upon returning to the town, he immediately went to confession. He took part at Mass and in the sacraments. He ceased spending his days in the tavern. He even worked on controlling his temper. He was a new man, inside and out. He lived as a faithful Catholic until his death three years later.
Giraud was not the only one to be converted. The people had heard that the Blessed Mother was crying due to their behavior. Fr. Mélin was quick to acknowledge the change in his parishioners. No longer did they treat Sunday as just another day of work. They attended Mass and went to confession and communion. Swearing and vulgar language were now rarely heard.
On November 17th, the people conducted the first organized pilgrimage to the mountain. Over 600 people took part. One parishioner who wanted very much to go but was unable to do so was Marie Laurent, wife of the town baker. She was forty-eight years old and had been unable to walk without crutches for several years due to rheumatism. Even that was painful and she was unable to attend church. She had been drinking some of the La Salette water and making a novena asking for the intercession of Our Blessed Mother to help heal her. She begged those going on the pilgrimage to pray for her. The pilgrims obliged, calling out to God while they were on the mountain to please heal her. When the pilgrims returned from their journey, Mrs. Laurent rushed out to meet them. She could walk! Not only that, she could run! The time she was healed was the exact time the pilgrims had prayed for her on the mountain.
News of the healing spread and a second pilgrimage was scheduled for November 28th. This time, more than a thousand pilgrims braved snow and freezing cold to climb the mountain.

Bishop de Bruillard became concerned about Melanie and Maximin’s welfare. Fr. Mélin agreed that something should be done. The two decided that the children should be sent to school with the Sisters of Providence in Corps. Melanie would live there and Maximin would be a day student with the diocese of Grenoble paying for any expense incurred.
In December, the two commissions reported to the bishop. They both came to the same conclusion: take a wait and see approach. They felt that there was not yet enough evidence to either endorse or reject the apparition. The bishop agreed to abide by their decision.
By this point, news of the apparition had reached Paris and the official government was not pleased. Word was sent from Paris that “the concocters of the pretended apparition were to be found and punished.”[ii] The Royal Prosecutor at Grenoble traveled to Ablandins where he interrogated Baptiste Pra and Pierre Selme. He took with him the written account that Pra had made of the children’s testimony.
In the spring, the Justice of the Peace of Corps was directed to interview the children. Fr. Mélin had faith that the children’s story would stand up under questioning and urged them not to be afraid. The interview lasted six hours and turned up no new information.
In June, the Minister of Justice and of Cults wrote to Bishop de Bruillard, demanding that he stop the spread of information about the apparition. The bishop responded that he had, in fact, forbidden preaching or publication on the matter.
In response to the growing notoriety of the vision, Bishop de Bruillard began a juridical inquiry into the apparition on July 19, 1847. Two priests were put in charge: Father Rousselot, a professor of theology who would become the official historian of La Salette, and Father Orcel, superior of the major seminary.

September 19, 1847 was the first anniversary of the apparition. There was still no official word from the Church as to its authenticity, but the bishop did allow Mass to be offered on the mountain. By September 17th, throngs of people were making their way to the mountain. The local churches were packed. Priests heard confessions for hours. There was no lodging to be had anywhere. Many pilgrims decided to simply stay on the mountain itself, despite a furious storm that was raging. At 2:30 a.m. Mass was offered on the two altars that had been set up on the mountain. When those Masses were complete, another set of Masses began. This continued until noon. Around 10 a.m. the sun came out.
Maximin and Melanie were there among the fifty to sixty thousand people who had come to pray. They were encouraged to retell the story. And so they did, one line at a time. In this time before microphones and speakers, they would say their part, and then others would repeat it until it traveled through the crowd. At the end of the day, the children led the pilgrims in praying the Rosary.
In October, Father Rousselot and Father Orcel reported to the bishop that, after investigating all the evidence including twenty-three cures attributed to Our Lady of La Salette, they were convinced that the apparition was authentic. The bishop, a patient and prudent man, then sent that report to a commission of 16 priests who went over it line by line, debating every point. In the end, twelve of them agreed that the apparition was true; four dissented.
Bishop de Bruillard would sign a formal doctrinal pronouncement on La Salette on the fifth anniversary of the apparition, September 19, 1851. It was then sent to Rome where Cardinal Lambruschini studied and approved it. On November 16th, the document was read at the 600 churches under Bishop de Bruillard’s care.
In the pronouncement, the bishop asserted:
Haste on our part would not only have been contrary to the prudence with the great Apostle recommends to a bishop; it would also have served to buttress the prejudices of the enemies of our religion and of a great many Catholics who are Catholics only in name. While a multitude of pious souls warmly welcomed this reputed apparition as a fact, we again and again considered with care all the grounds which could lead us to reject it. . .
On the other hand, we were strictly obliged not to regard as impossible an event which the Lord (who would dare deny it?) might well have permitted to further His glory, for His arm is not shortened and His power is the same today as in ages past.
In conclusion, the document stated, “We give judgment that the apparition of the Blessed Virgin to two herders on September 19, 1946, on the mountain of the Alpine chain situated in the parish of La Salette in the territory of the archpriest of Corps, bears in itself all the marks of truth, and the faithful have grounds to believe it indubitable and certain.”[iii]
The Church had spoken, but the controversy surrounding Our Lady of La Salette was far from over.
[i] Kennedy, 74, 62.
[ii] Kennedy, 92.
[iii] Kennedy, 147.

Our Lady of La Salette: A Mother Weeps for her Children is Available on Amazon
Posted by Patrice Fagnant-MacArthur at Thursday, September 05, 2019

Email ThisBlogThis!Share to TwitterShare to FacebookShare to Pinterest
Labels: Our Lady of La Salette