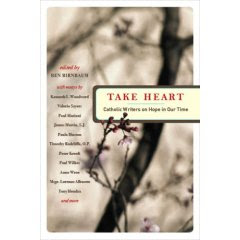 What does it mean to have hope? In “Take Heart: Catholic Writers on Hope in Our Time” thirty-five writers “reflect on the nature of hope and its sources and uses in our time.” Thirty-two of the writers are Catholic. The remaining three include a rabbi, an Orthodox priest and a Lutheran minister, used as a “control group” to compare and contrast the Catholic experience of hope with a more universal sense of hope. Interestingly enough, Ben Birnbaum, the editor of “Take Heart,” is Jewish.

The essays are divided into four sections: Part One – Build, Part Two – Love, Part Three – Believe, and Part Four – Other Voices. Many of the writers seek to define “hope.” All agree that it is not unbridled optimism which often has no basis in reality. Paul J. Griffiths, who holds the Schmitt Chair in Catholic studies at the University of Illinois at Chicago, states that “hope and lament cannot be separated in a fallen world . . .To hope in a single-mindedly optimistic way would be absurd and superficial; to lament without hope would be strictly damnable.” Ann Wroe, the special reports and obituaries editor of “The Economist,” defines hope as an action. “Hope is that virtue by which we idealize and create – the landscape in which we build our visions.” A.G. Harmon, who teaches at the Catholic University of America, sees hope as “the energy within, that which sustains us on a passage that would be too arduous and dispiriting otherwise.”

Where does one find hope? As an angry young man imprisoned in solitary confinement, Joseph Pearce found hope in a set of rosary beads. He had no idea even how to pray the rosary, but “it was hope that brought me the first inklings of the peace to be found in Christ. It was hope that taught me humility. It was with this thinnest thread of hope in my hands that I climbed downward to my knees.” He would ultimately embrace the Catholic faith and now teaches at Ave Maria University in Naples. Lawrence S. Cunningham of the University of Notre Dame finds hope in examples of Catholic life in the local community. Colleen Carroll Campbell, a fellow at the Ethics and Public Policy Center, finds hope in the example of her father who has suffered from Alzheimers for a decade:

Dad always reminded me that hope and suffering were intertwined, and hope had the last word. . . The only hope he has that he can withstand this disease is the authentic Christian hope that sustained my father all his life, the hope that he once tried to teach me through words but ultimately taught by example. It is the hope described in the eighth chapter of Romans that Dad loved so much: “I consider that the sufferings of this present time are as nothing compared with the glory to be revealed for us . . .For in hope we were saved. New hope that sees for itself is not hope. For who hopes for what one sees? But if we hope for what we do not see, we wait with endurance.”

“Take Heart” probes what it means to be a people of hope. On a personal level, we have hope in the Christian promise. As a group, we have hope in our Church. Hope is not always easy to come by, but indeed, that is when it is most needed. “Take Heart” will help readers reflect on what hope means to them and how to then live that hope. It is time well spent in light of the current state of our world.