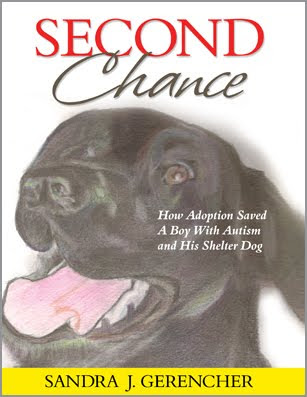 Second Chance: How Adoption Saved a Boy with Autism & His Shelter Dog

Sandra Gerencher is a special education teacher. Over the past 10 years,she has been on a mission to save dogs from high-kill animal shelters. Her first rescue was P.J., the black and white Pomeranian in the story. She also adopted the orange Pomeranians Shelby and Lil Rascal, and of course, Chance, the big black Rottweiler/German Shepherd mix. All characters in "Second Chance" are based on Sandra's real life family especially her adopted son, Terry. He was considered a special needs child because he was born with a genetic disorder known as Fragile X Syndrome. The disorder can cause many cognitive disorders, such as autism, attention deficit hyperactivity disorder, mental retardation and depression.

"Second Chance" is told from the perspective of the dog being adopted. Chance gets introduced to his new surroundings, and the other dogs who live in his new home. He also is introduced to Ryan, an autistic boy who is also an adopted member of the family. Chance struggles to understand what both "autism" and "adopted" mean. In time, he comes to know what it means to be loved and adopted. He also comes to be able to communicate with Ryan in a special way, even though Ryan has difficulty communicating with people.

This is a sweet story about a boy, a dog, and the power of adoption. The soft watercolor illustrations are beautiful and add to the experience.

You can read an excerpt of the book at: http://www.freado.com/read/8704/second-chance-how-adoption-saved-a-boy-with-autism-his-shelter-dog

Patrice - as always THANK YOU for a thoughtful review of one of our titles. I'm glad that you enjoyed SECOND CHANCE and for sharing the book with the wonderful readers of Spiritual Woman. Your support means a lot and we're glad you are a part of the blog tour.