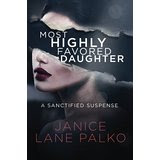 I recently had the pleasure of reading Most Highly Favored Daughter by Janice Lane Palko. It is a suspense-filled Catholic novel with many plot twists which draws attention to the issue of sex trafficking. Because of that theme, it can be a difficult and troubling story to read at times, but it is an important topic that we should not turn a blind eye to.

Palko was inspired to write a novel pitting a pair of sisters against each other in rivalry for their father's affection while completing coursework studying the sister relationship. At the same time, her increasing awareness of the enormous problem of human sex trafficking spurred her desire to address this horrendous problem in a book. Initially, she intended to set the novel in a larger metropolitan area such as New York or Washington, but her readers spoke and urged her to set the novel in her hometown of Pittsburgh.

A freelance writer, Palko previously interviewed Dr. Mary Burke, a professor at Carlow University and the founder of the Project to End Human Trafficking, for an article, and from that interview, Palko was convinced that her book should be set in Pittsburgh because many people falsely assume that human trafficking is confined to larger cities not smaller ones like Pittsburgh.

The novel tells the tale of the Hawthorne sisters--Cara and Sophia. Cara Hawthorne, the elder sister, has it all, that is, until she inexplicably awakens naked in a strange hotel room the morning after being honored with the Mother Teresa medal by the Diocese of Pittsburgh for her charitable work. When an envelope arrives containing despicable photos framing her with a heinous crime, her charmed life begins to crumble, jeopardizing her reputation, her marriage, and ultimately her life.

As she and private investigator Jake Gold battle to prove her innocence, they unearth shocking revelations about the city she serves, the people she loves, and her beautiful reckless sister, Sophia, the celebrity diva. Set during Pittsburgh's first time as host of the Super Bowl, Most Highly Favored Daughter scores big with those who like their suspense served Pittsburgh style.