"Will I See My Dog in Heaven?" 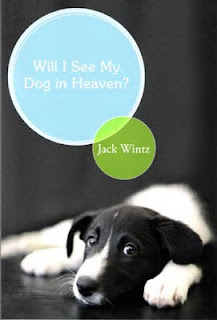 I haven't read Will I See My Dog In Heaven

by Fr. Jack Wintz, but the title caught my eye and I read the review of it in St. Anthony Messenger. It is a common question, especially for those of us who love our pets. The big theologians say "No," that our beloved furry friends don't have free will and therefore cannot choose God and aren't granted access into the beatific vision. Well, that is one way to look at it and it is a reasoned argument. But seeing as none of us know for sure, I tend to agree with Fr. Wintz that the answer is "Yes." Anyone who looks into an animal's eyes knows that they have a soul. They were created by God and God proclaimed his creation "good." Why would he not extend that creation into the next world?

Per Barbara Beckwith's Review, "Father Jack argues that God would not suddenly stop caring for the creatures he had called "very good" and put into existence with great care in the Garden of Eden. He would want them with him in 'the restored garden' of heaven." He also tells of St. Francis "who always thought of animals as his brothers and sisters and acted accordingly, like with the wolf of Gubbio. St. Francis put animals into the Christmas scene at Greccio because he firmly believed that Jesus came for their sake as well as ours."