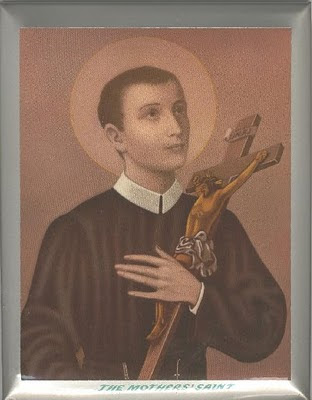 Born April 6, 1726 in Italy, Gerard Majella was the youngest son of a tailor and his wife. His mother often brought Gerard and his three older sisters to daily Mass with her. Even as a child, God blessed him in extraordinary ways. At four years old, he ran to his mother after Mass and held out a small roll, saying, “Mama, see what I got from the little boy!” His mother didn’t pay much attention, except it kept happening every day. She decided to watch at a distance to find out who this “little boy” was. The statue of Our Lady of Graces in Capotignano was coming to life! He was receiving the bread from the Christ Child himself!

His father died when he was twelve years old and the family was left in poverty. He went to work as a houseboy for Bishop Albini at Lacedonia. He became well-known for his kindness, visits to the poor, and his compassion. He became apprenticed to a tailor and eventually took over his father’s former shop. He was good at his job and was well-respected in the community, but his heart was restless. He wanted more. He applied twice to become a Capuchin, but was turned down because of his health. He resolved that if it was God’s will that he live a holy life as a tailor, then that is what he would do.

On April 13, 1749, a representative from the newly formed Congregation of the Most Holy Redeemer spoke at Mass. Gerard decided he wanted to join them as a lay brother. Like the Capuchins, these missionaries wanted nothing to do with him. Gerard was not to be turned down, however. He chased them down the road for 12 miles! He begged and pleaded until finally they relented, convinced he would be a worthless addition to their order.

Despite their initial reluctance, he turned out to the ideal brother. He taught at the local seminary. Even though his own formal education had ended when he was twelve, the students were amazed by his wisdom and insight. He told stories to children and taught them to pray. He also had the gifts of reading souls and curing the ill. If he did not cure someone who asked for his help, he would tell them the reason why. He also had the ability to tell people when they would die.

Near the end of his life, he was accused by a woman of fathering her child. When questioned by his superior, he remained silent. He was told to stay in the monastery and have no further contact with the public and not to go to communion. This was an extremely hard punishment for him. When the woman finally recanted, his superior asked him why he had not defended himself. He replied that their rule forbade making excuses.

Gerard died on September 5, 1755 at age 29 of tuberculosis. Before his death, he asked that a simple white placard be placed on his door. It said “Here the will of God is done, as God wills, and as long as God wills.” He was canonized on December 11, 1904. He is the patron saint of children (especially unborn children), expectant mothers, and falsely accused people.
Posted by Patrice Fagnant-MacArthur at Sunday, January 03, 2010