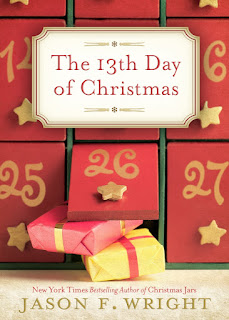 The 13th Day of Christmas

December 26th is one of the saddest days of the year. Everyone is worn out from Christmas, half the new toys are already broken, children are complaining that they are bored, some Christmas trees have been tossed to the curb, and all the "most-wanted" items a few days earlier are now marked for fifty-percent off.

With his new novel, "The 13th Day of Christmas," Jason F. Wright is working to change that. He tells the story of an unlikely friendship between an elderly widow, Marva, whose much-loved husband and son both died over thirty years ago, and a nine-year old girl, Charlee, whose family has fallen on some hard times. Marva invites Charlee over to her home to help decorate for Christmas and shows her a very special Advent calendar. Unlike most such calendars which end at Christmas, this one includes a door for December 26th, the so-called "13th Day of Christmas."

Purists will point out that the twelve days of Christmas are from December 25th to the feast of Epiphany on January 6th. However, for the purposes of this story and the point that Wright is trying to make, this accounting of the days as leading up to Christmas works.

When Charlee becomes critically ill and lands in the hospital on a long-term basis, she begins to receive letters from the "traveling elves," sharing stories of the twelve days of Christmas and giving her some unusual gifts, but it is the secret of the 13th Day of Christmas that holds the true magic and the power to change lives.

This is a heartwarming story, easy to read, with an important message. Even if you don't get to read it until after Christmas, it is worth adding to your reading list.

December 26 of a certain year is a day I'm forever grateful for, since my dear friend was born that day. Just sayin'! Sounds like a lovely book.