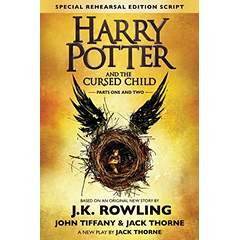 I came late to the Harry Potter party. By the time I read them to my boys, all seven books were out so we never had the experience of eagerly awaiting a new book wondering what would happen next. Since that initial reading, I read the entire series to the kids two more times and they have read it several times independently. Son #2 has also read a great deal of Harry Potter fan fiction.

Therefore, it was exciting to pre-order Harry Potter and the Cursed Child from our local bookstore and to look forward to its release on July 31st. No, we didn't stand in line at midnight, preferring to spend that time sleeping, but we did pick it up later that first day.

So, does the book live up to the hype?

First of all this is play. I knew that going in. With children involved in acting, I have my fair share of experience reading scripts as I help them run lines. Still, it took some getting used to. Gone is J.K. Rowling's finely crafted prose. What is left is dialogue and a few brief descriptions. It requires much more use of imagination.

I honestly would love to see it performed. I could easily imagine it as a movie with a great deal of special effects. I have no idea how they could handle all of them on the stage (even given the huge budget they must be working with.) It's also hard to imagine anyone but Daniel Radcliffe in the role of Harry Potter. As I read the book, I pictured the actors from the original set of movies.

The story is not up to the standard of the first seven - it would have been a miracle if it could have been- but it was enjoyable. It picks up where Book 7 left off. In fact the first scene is actually the last scene of that book, with Harry and Ginny and their children at Platform 9 3/4 sending Albus off to Hogwarts.

One major story line focuses on the strained relationship between Harry and Albus. There is a great deal of time-turning going back to scenes from the original books and changing history in the process. It also allows now-deceased characters such as Cedric Diggory, Severus Snape, and even Voldemort to play a role.

Overall, this is an enjoyable story as long as you don't go into it thinking you are going to get a repeat of the magic of the first seven books. Some of the die-hard Harry Potter fans have really ripped it apart in Amazon reviews, and I can understand their point although I don't think their venom and one star reviews were necessary. There are some definite plot holes in the story and much of it is a reworking of things that already happened. But still, it was fun to reenter the world of Harry Potter and see what the future held for the characters.