Mother Teresa will be canonized by Pope Francis on September 4, 2016. 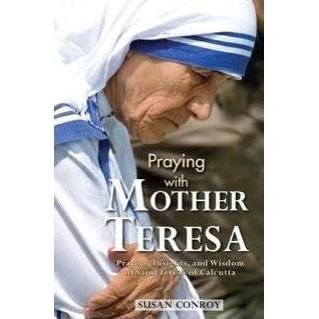 Conroy writes, “I hope that sharing the prayers and inspirations which nourished Mother Teresa’s intense spiritual life can help us to advance on our own journey of love to perfect union with God and everlasting life.”

Praying with Mother Teresa is arranged in three parts. The first, “Lessons& Prayers from Mother Teresa,” includes reflections about and inspiration from Mother Teresa on prayer, love, suffering, joy, humility, poverty, peace, holiness, Our Lady, and Our Lord Jesus, the Holy Eucharist and Adoration. The second section features Mother Teresa’s favorite prayers with prayers for many occasions. Part three focuses on The Dark Night of the Soul and trusting in God’s presence even when He seems far away and there are no consolations to be had.

Mother Teresa said that prayer was the secret to all the remarkable things she did. She lived a life rooted wholly in God. As Conroy states, “Prayer fortifies and prepares us to love and serve and sacrifice ourselves, because prayer unites us with the Strong One, the One Who came not to be served but to serve and to give His life as a ransom for many, in order to save us.”

One story that touched me deeply was about Mother Teresa’s own mother. As Teresa approached her eighteenth birthday, she felt deeply called to serve as a missionary in Calcutta. She prayerfully discerned this called and applied to join the Loreto Sisters, but her mother knew if her daughter accepted this call, she would never see her again. “Her mother went into her room, closed the door, and remained there for 24 hours. She came forth from her silence and solitude with the inner strength and grace to accept this decision and support her young daughter in following God’s will.” What a hard sacrifice to make. Mother Teresa’s mother was no doubt a prayer-filled woman herself and a role model for parents who must let go of their children so that they can do what God has called them to do.

This book invites us to reflect more deeply on the life and example of St. Teresa of Calcutta. Praying with Mother Teresa is a beautiful collection that offers encouragement and inspiration as we strive to live a more Christ-centered life.