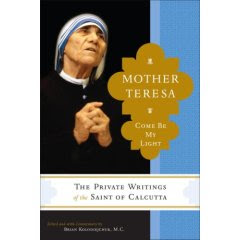 “If I ever become a Saint - I will surely be one of ‘darkness.’ I will continually be absent from Heaven – to light the light of those in darkness on earth.” – Mother Teresa

When I was growing up in the 1980s, Mother Teresa was widely proclaimed as a “living saint.” An elderly woman with knarled hands and a bright smile, she was the epitome of what it meant to live a Christian life. In “Come Be My Light,” we have the opportunity to get to know the spiritual life of the woman behind the smile.

Brian Kolodiejchuk is the postulator for the cause of Mother Teresa’s canonization by the Catholic Church. As such, he has had unprecedented access to her writings and letters. In “Come Be My Light,” he has used the writings to create a vivid portrait of this remarkable woman from the time she entered religious life in 1928 at age 18 until her death in 1997. Even in these early days of religious life, she began to experience some of the darkness that would dominant the second half of her life. She wrote to her spiritual director prior to her making her final vows in 1937: “Do not think that my spiritual life is strewn with roses . . .Quite the contrary, I have more often as my companion ‘darkness.’ And when the night becomes very thick – and it seems to me as if I will end up in hell – then I simply offer myself to Jesus. If He wants me to go there – I am ready – but only under the condition that it really makes him happy.”

In April 1942, with the permission of her spiritual director, Mother Teresa made a private vow to God “to give to God anything that He may ask, ‘Not to refuse Him anything.’” She trusted in God’s will for her, even when she couldn’t understand the reasons behind what God would ask. “It was in giving Jesus whatever He asked that she found her deepest and lasting joy; in giving Him joy she found her own joy.” She followed St. Therese of Lisieux’s example of doing small things out of love.

On Tuesday, September 10, 1946, Mother Teresa experienced a “decisive mystical encounter with Christ” in which Jesus called her “to give up all and follow Him into the slums – to serve Him in the poorest of the poor.” She would continue hearing Jesus’ voice speak to her for the next few months. “The ‘Voice’ kept pleading, ‘Come, come, carry Me into the holes of the poor. Come, be My light.” Yet, Mother Teresa could not do it on her own. She needed her Archbishop’s approval and he responded to her request cautiously, wishing to pray about the situation. At one point, her spiritual director even requested that she put the whole idea out of her mind. This was so hard for Mother Teresa, “yet, faithful to her commitment not to refuse the Lord anything, she chose to obey” as the Voice told her to do: “you shall not be deceived if you obey for he belongs to me completely.” Eventually, the Archbishop did give his permission in January, 1948. The remainder of her life would be dedicated to her work in the slums of Calcutta.

This choice cost her great personal sacrifice. It also marked the beginning of her true dark night. While God blessed the work, Mother Teresa felt abandoned by God causing her great spiritual torment. “Rather than hardening her, her correspondence shows that suffering rendered her more kindhearted. She encouraged others to smile in suffering as she herself did.” She did not want others to suffer because of her suffering. She could continue to resonate joy because she trusted that God had a loving plan for her and that her darkness was part of this plan. She would eventually come to love the darkness. She came to understand that her suffering was a “very small part of Jesus’ darkness and pain on earth.”

“Come Be My Light” gives the reader an intimate look into the spiritual life of Mother Teresa. She has so much to teach all of us who struggle here on earth, those of us who get discouraged and feel that God has abandoned us at times. She teaches us about faith and fortitude and perseverance in the face of amazing odds. She teaches us about doing the will of God. “Come Be My Light” is an amazing book.