A Child's Image of God 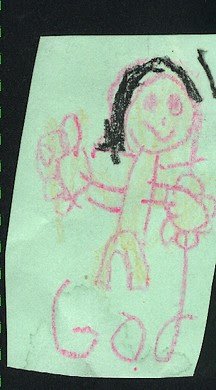 I have been meaning to post this one for a while. When we were doing our Jesse Tree during Advent, we talked about Jesus' ancestors and how they were represented by the symbols on the tree. Six-and-a-half-year-old David asked, "If God is Jesus' father, shouldn't he be on the tree?" Good point, so I told him he could draw a picture of God on the tree. It wasn't until a few days later that I realized he actually had drawn a picture of God on our Jesse Tree. I just thought this was priceless and wanted to share it with you.
Posted by Patrice Fagnant-MacArthur at Sunday, January 13, 2008

Email ThisBlogThis!Share to TwitterShare to FacebookShare to Pinterest
Labels: God