One of the Many Ways Mothers Earn their Heaven 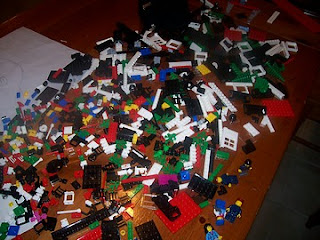 My next door neighbor has been doing some work for LEGO company and they have been giving him free LEGO sets as gifts. He very generously gave the boys a couple small sets over the weekend. When he saw how excited they were by them, he returned Tuesday night with four more sets - two of which were very large. The boys were in their glory!

I already put together the "Indiana Jones" set featuring 524 pieces. That one wasn't so bad - while the instructions consisted of two books, the pieces were grouped in bags by the order in which you used them and the bags were numbered. The set pictured here is supposed to build a train. Unfortunately, there were still two instruction books, but the pieces were not sorted by any recognizable system and they were not numbered. This is a painful process of trying to find the correct piece amidst the pile which is currently taking up most of my kitchen table. Looks like I will be spending much of this upcoming weekend bonding with LEGOs!
Posted by Patrice Fagnant-MacArthur at Thursday, January 17, 2008

Email ThisBlogThis!Share to TwitterShare to FacebookShare to Pinterest
Labels: Parenting