This was my quilting project for the past year. I finished it last night. I actually had way more time to quilt than usual due to quarantine. In recent years, I've gotten more into art quilting. This quilt has one panel for each season. It worked out that I was working on the corresponding seasons as the seasons past. I did fall in fall 2019 and went on from there. My favorite panel is winter. 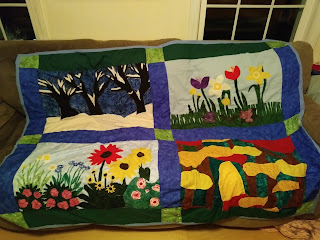 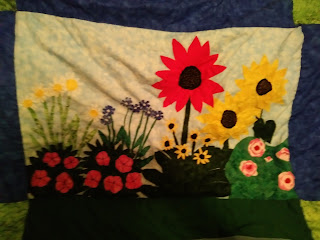 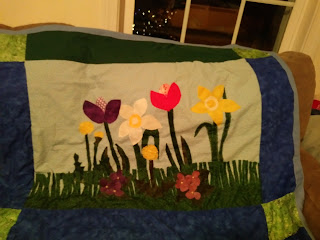 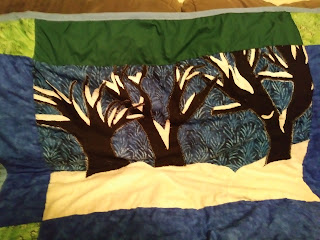 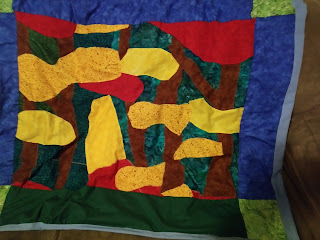 Posted by Patrice Fagnant-MacArthur at Sunday, October 11, 2020 No comments: 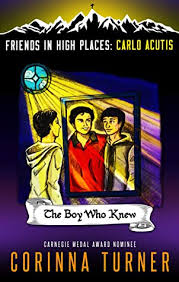 Ven. Carlo Acutis is being beatified October 10, 2020. Born in 1991, he died in 2006 of leukemia but managed to pack a great deal into his short life. In many ways he was a modern teen. He enjoyed video games and football. He even played Pokémon. He was also something of a computer genius who might end up the patron saint of the internet. He also had an incredibly deep faith and helped share Eucharistic miracles with the world.

Corinna Turner’s new book, The Boy Who Knew, introduces readers to Blessed Carlo Acutis while at the same time offering a fast-paced quick read that will keep ages ten and up turning pages. The story takes place from October 3rd to October 12th, 2020 (yes, Covid-19 is part of the story and masks and social distancing are a thing).

Daniel is a teen who has just been diagnosed with leukemia. He tells his parish priest about it who recommends that Daniel make a novena to Blessed Carlo Acutis, inviting him to be his prayer buddy. Daniel reluctantly decides it is worth a shot. As Daniel faces his own mortality and his father’s anger with God over Daniel’s diagnosis, he offers the daily prayers, learning more about Carlo each day.

The Boy Who Knew is an excellent book for teens to read or for a family to use as a read-aloud. Turner has included the Novena to Blessed Carlo Acutis at the end of the book. It is so rare to have a young modern blessed like Carlo for teens to look up to. The Boy Who Knew invites readers to get to know this remarkable young man.

Posted by Patrice Fagnant-MacArthur at Wednesday, October 07, 2020 No comments:

Cover Your Grandchildren In Prayer 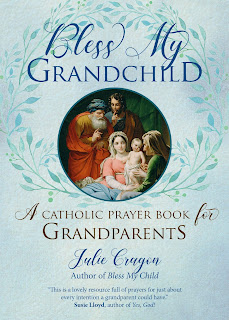 One of the greatest gifts a child can have is a grandparent who prays. Julie Cragen, author of Bless My Child, has written Bless My Grandchild: A Catholic Prayer Book for Grandparents. This is a beautiful compilation of prayers covering almost every intention one might have for a grandchild.

The first section is “Prayers for before My Grandchild is Born”. It includes a prayer for a couple struggling with infertility and a prayer for grieving a miscarriage. There are prayers for new mothers and fathers and for twins or multiple births.

“Prayers for Newborn and Infant Grandchildren” includes prayers for a mother in labor, a baby in intensive care, an adopted grandchild, a prayer of thanksgiving for a new baby, prayers for children with health issues or special needs, and one for grieving the death of a baby.

In “Prayers for Sacramental Graces”, there are prayers for a grandchild receiving baptism, making his or her first reconciliation, first communion, confirmation, getting married, or receiving the anointing of the sick, as well as prayers for altar servers and those discerning a religious vocation.

There is always a reason to pray for a grandchild. While we can use traditional prayers or simply raise our grandchild’s intentions to God at Mass or the silence of our hearts, Bless My Grandchild offers words for many of the intentions we might have. This collection of prayers would make a lovely gift to offer to any of the Catholic grandparents in your life.

Posted by Patrice Fagnant-MacArthur at Monday, September 28, 2020 No comments:

Deepen Your Relationship with Jesus by Imitating St. Therese 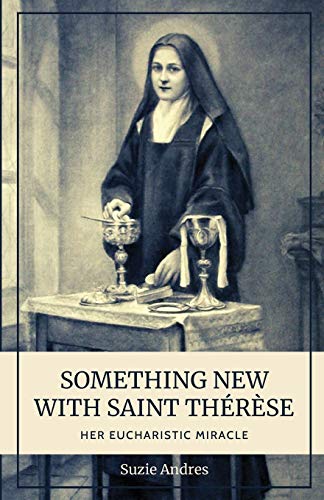 With the many, many books that have been written about St. Therese, it would seem impossible that there could possibly be something new to write about, yet Suzi Andres has taken on the challenge and succeeded in Something New with St. Therese – Her Eucharistic Miracle.

On October 19, 1997, Pope Saint John Paul II proclaimed St. Therese a Doctor of the Church. In his apostolic letter Divine Amoris Scientia (“The Science of Divine Love”), he wrote: “The core of her message is actually the mystery itself of God-love, of the Triune God, infinitely perfect in Himself. . . At the summit, as the source and goal, is the merciful love of the three Divine Persons, as she expresses it, especially in the Act of Oblation to Merciful Love.”

St. Therese believed in God’s love so much that she asked Jesus to remain within her as a tabernacle from the time she received the Eucharist until the next time she received the Eucharist. Not only that, she encouraged others to ask for the same grace. St. Therese did not feel this was a grace only for great souls. In fact, she would have argued vehemently (even if we might disagree) that she was not a great soul, but rather a very little soul.

Andres makes a very thorough argument for why we should, along with St. Therese, pray the Act of Oblation to Merciful Love. She shares stories of other saints who also were blessed with the grace of being a long-term tabernacle for Our Lord. Andres also raises many objections that others might make to this argument and refutes them one by one.

In the appendices, Andres includes the Act of Oblation to Merciful Love, a brief biography of St. Therese, and a list of recommended reading (I’ve already highlighted some books I want to read).

If you have ever wanted to have a deeper union with Jesus or wondered if there was something more you could learn about St. Therese, Something New with St. Therese is the book for you.

Posted by Patrice Fagnant-MacArthur at Monday, August 24, 2020 No comments: