Today I'm pleased to be the stop on the blog tour for fellow Catholic Writer's Guild member Theresa Linden and her great new book Tortured Soul. 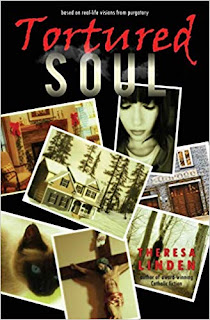 What happens to us after we die? Is there a connection between those in this world and the next? Can we help the souls in purgatory? Those are the questions at the heart of Theresa Linden’s suspense-filled new novel Tortured Soul.

Fred Rake was a 45 year-old mechanic when he was murdered by his 17 year-old son. Jeannie Lyons lives in the home she grew up in with her brother Edwin and his family. Both of Jeannie’s parents are deceased but she still feels deeply connected to them and the home where they all lived. But Erwin’s family is growing and he and his wife want Jeannie to move out.

Erwin picks out a house for Jeannie and he and his friend Oliver, a photographer, help her move. Unexplained noises and occurrences in the house soon make Jeannie live in fear, but Oliver is the only one who believes her and makes an effort to help her. It turns out the house Jeannie now lives in belonged to the murdered Fred Rake; God has allowed his tortured soul to visit her in an effort to help both of them.

This thought-provoking and spine-tingling novel is loosely based on the experiences of German mystic Eugenie von der Leyen (1867-01929). While Tortured Soul is entertaining and powerful in its own right, its message of the need of prayer and sacrifice for the souls in purgatory is even more important. This aspect of our Catholic faith is often neglected in our modern world. As part of the Communion of Saints, we are called to help our brothers and sisters who have gone before us and are suffering in purgatory.
at May 16, 2019 No comments: 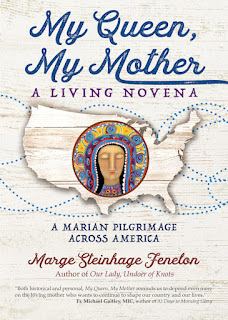 May is a month in which we pay special honor to Mary. That makes it a perfect time to learn more about some of the Marian shrines in the United States. In My Queen, My Mother: A Living Novena, Marge Steinhage Fenelon shares her pilgrimage to nine Marian shrines, inviting readers to join her in praying a special novena to consecrate both ourselves and our country to Mary. Fenelon wants us to “uncover the spiritual treasures of our United States” and to “reconquer [our country] for our Lord and his Mother and help others to set out to reconquer it too.”

When we consecrate ourselves or someone else to Mary, we are “asking Mary to claim that person for herself now and for always. Of course, when Mary “claims” someone for herself, she also claims that person for her Son because the two are inseparable. The only reason for Mary’s existence is to lead us to Jesus.”

Fenelon offers a history of each shrine and recalls some of the spiritual blessings that have been given there. One of the shrines that I found most interesting to learn about was the National Shrine of Our Lady of Good Help in Champion, Wisconsin. This is the only Church-approved Marian apparition site in the United States. Mary appeared to 24-year-old Adele Brice in 1859. Mary told Adele to pray for the conversion of sinners and to teach the catechism. Adele ultimately began the Sisters of Good Health and several miracles were recorded as a result of her prayers. As Fenelon points out, the overriding message of this shrine is that “if it is indeed God’s will, then you’ll be given the grace, courage, and know-how to carry out your mission. What’s more, if you invoke Our Lady of Good Help, she’ll see you through it.

I found the stories of these shrines fascinating. The only thing that I wished the book contained were images of the shrines. To help remedy that, I’m including links to the websites for the featured shrines so that you can take a virtual pilgrimage. By no means is this exhaustive list of Marian shrines in the United States. As Fenelon points out, there are many waiting for us to visit, learn about, and pray at. 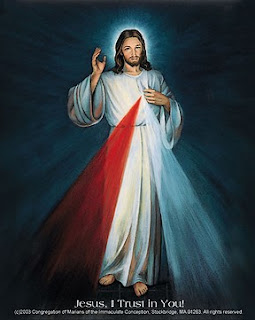