The Value of a Few Minutes 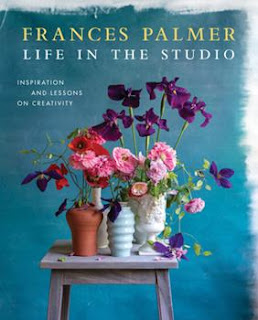 This past weekend, I read Life in the Studio by Frances Palmer. Palmer is a ceramic artist from Connecticut. This book offered a look into her methods of working. It was also a visual delight, featuring loads of beautiful photographs of her pots as well as flowers.

One section is titled: "On Working Row by Row". In it, Palmer reflects:

When I was about eight years old, my mother taught me how to knit. . . .In my twenties, I got orders from friends for knitted pieces, and since I was working full-time, I started to carry knitting with me everywhere. At any opportunity, I'd knit a row or two, to advance the project. . . .If one considers the span of the day and the list of what needs to be accomplished, it is easier to break the items into components. A row is a row is a row is a realistic way to approach tasks one by one. People have told me that they wished they could have done such and such, but they never had enough time. The truth is, there is never enough time, yet I find that these moments provide the best opportunities to maximize the minutes of the day.

This is the same philosophy I have in my own life. I don't have any huge blacks of times to work on projects, and if I waited for them to do something, I'd never get anything done. So, I read a few minutes here or there, I work on books a paragraph or two at a time, I do 5 minutes of Duolingo a day to stretch my brain and work on learning Spanish, I take a few minutes each day to post something on social media, I quilt at night while we watch some television, etc. All those little bits add up, and in the end, I have something to show for that time. Never underestimate the value of a few minutes taken daily to work at something you want to do. 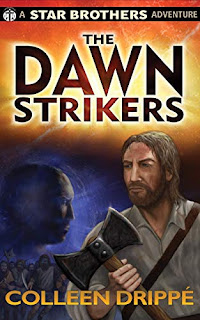 Today I am pleased to be part of a blog tour for fellow Catholic author Colleen Drippe and her new work of Science Fiction: Dawnstrikers.

Heroes – and heroes again.  All kinds of heroes.

Planet Fen, lost colony, is now cut off permanently from the rest of the civilized worlds.  Unfortunately a lot of people are cut off with it:  the occupying troopers and their families, innumerable bureaucrats, scientists, technicians and even a missionary or two.  They are all outnumbered and culturally swamped by the native colonists, a mixture of half converted primitives and a contingent of ferocious xenophobes who want all offworlders exterminated.

In this, the third book of the Gelen series, the bishop and the commander at Havekgerem, both have their hands full.  The former must rein in a group of Faring Guards, fanatical, axe-wielding Lost Rythan exiles who are determined to protect him at all costs, while the commander tries vainly to police the region with his disgruntled troops.  And in the midst of this come the Dawnstrikers, native blackshirts blindly following their charismatic leader as he hatches a plan to not only kill all foreigners but also to wipe out their rival tribe.  And they almost succeed --

When he saw Ella Trenre’s reaction and felt the sudden strands of patterning arising in the room, Vess wanted to draw back from what he had done.  But it was too late.  Maybe it had always been too late, for it was as though another hand had taken his, forcing him to pull out the scrap of skin and to give it to her.  It was the first time he had felt something like this and it frightened him a little.

Rising from her place on the bench, Ella stood gripping the fragment while her eyes locked with those of her husband.  Brana Fadre came over to stand behind her and, after a moment, Vess left his brother to join the group.

Daen, however, remained on the bench, Spear and Ella’s child on his lap.  The little girl’s eyes were round with wonder as she let fall a piece of chiven bread onto the floor.

Even she seems to know something’s up, he was thinking dully.  Even this baby, never called to be a gelen, never given one of the names but only that of the Christian lady whose image was in the chapel – even this child is closer to being a gelen than I am.

Power sang in the air.

I always wanted to be a science fiction writer.  But I had some other stuff to do first.  So I raised four children and wrote articles for magazines and a few children’s books.  I gardened and home-schooled the children and even spent a few years teaching in a school.  Sometime during this time, my first science fiction novel, GELEN was published.  And when the grandchildren started to arrive (I’ve got twenty, going on twenty-one of them so far), I helped out with them and now I’m homeschooling two of them.  But I also got a lot more serious about writing those sf novels.

I write what I want to read.  There are whole worlds in my head and when they come out on paper, even I am surprised.  Who knows where it all comes from?  I read and read and digest everything from linguistics to archaeology, exobiology to military history – and then it turns into stories.  So far I have five sf novels published, not counting the current one, DAWNSTRIKERS.  There are more to come.

I have a vision here.  Some things I take for granted.  The universe makes sense.  People are not particularly good, but we try and most of us mean well.  That there is a God and He is extremely patient.  That the laws of physics, of science, hold good wherever you go.  I have to follow them when I write.  Stuff like that.  And so the books get written and I find they are all interrelated – same milieu, same universe as it were.  So far.

When did you write your first story?

At the age of six, I wrote about a girl pirate.  I was living on a tropical island at the time and pirates were easy to imagine.  It was my ambition to be one, actually.

Why did you take up writing science fiction?

Actually I have written other things, four children’s books (out of print at the moment) and an assortment of articles on this and that.  Short stories here and there.  But I have been a science fiction fan ever since I discovered the genre, at about the age of 9.

How has your religion affected your writing?

While I don’t specifically shove religion into the books, it does make a background.  I am a Catholic and there it is.  I baptize the genre I love and then leave it to itself.  The results seem to please my readers, even non-religious ones.

How did this book achieve its final form?

Actually, this book began as a much longer book, originally titled Children of the Moon and contained a really lot of story.  Then I realized that it was too long, too involved.  So I rewrote it into the present form.  Maybe I’ll use some of the discarded material to make another book.

Just how does a science fiction novel get from your head to the word processor?

Alas, I do not do much in the way world building, organizing or whatever.  A character comes to life, some scenes appear and whole worlds just come out as needed.  I make a few notes of what happens when and then I just write it.  Sometimes I have to rewrite.  But most of the work gets done in my head before it ever hits the keyboard.