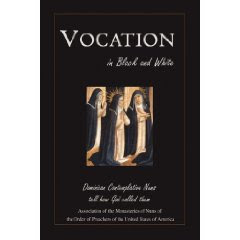 I have always had a soft-spot in my heart for the Dominican Nuns. My mother is a third-order Dominican. As a result, as a little girl I spent a great deal of time at the local Mother of God Monastery. It always seemed so peaceful there. Located on the top of a hill on a busy street, it never-the-less seemed so far away from the regular world. It was, and is, a place set apart. I never saw any of the nuns up close. I could only hear their singing on the other side of the grille that separated their side of the Church from the public chapel. Outside, I would try to peek through the fence to try to catch a glimpse of their hidden world. How I longed to see and be part of that world! Yet, for me, it was not meant to be.

Many women, however, have been called to the Dominican Nuns' contemplative way of life. In honor of 800 years of Dominican ministry, twenty-three nuns share their stories of how God invited them to this way of life in Vocation in Black and White: Dominican Contemplative Nuns tell how God called them

The stories are amazing. It is so interesting to read of the various ways God speaks to a soul. There is no set blueprint, no formula by which someone can be certain that they have a call to contemplative life. Sometimes it was an interior voice that spoke in a woman's heart. Other times, it was the simple unfolding of circumstances that led a woman to the Dominicans' door. There is no set background a woman must have had.

The women in “Vocation in Black and White” come from hugely divergent circumstances. Some were cradle Catholics. Others were converts to the faith. Some knew from a young age that they were meant to live out their lives as a religious sister. Others took a much more circuitious route to discover where they belonged. Some had seriously considered marriage. Others knew that God was their only true love. Many had to try out life in several different types of religious communities before they found where they belonged. Several spoke of the influence of St. Therese. They wanted to be like her and so attempted to enter a Carmelite convent, only to be turned down. They discovered the Dominicans by default, but couldn't be happier with their choice. Almost all had to fight for their vocation, standing up against parents and even other religious who would try to prevent them from pursuing this way of life.

Vocation stories can be a great help in assisting others to discern their own vocations. Sister Joseph Marie of the Child Jesus lived successfully out in the world for several years climbing the corporate ladder, yet she felt empty. She attended daily mass and did much spiritual reading. She writes, “I often found myself in tears upon hearing any Gospel passages related to the calling, especially the story of the rich young man who refused to follow Jesus because he had much to give up.” She called the national vocation office and obtained a list of monasteries in California. She felt very attracted to the Dominicans. Over the course of several visits, she realized it was the right place for her. She invites those still attempting to discern their vocation in life to “come and spend some time in solitude . . . better to hear God's voice speaking to your heart and to discover His will. Only then can you, 'Taste and see the goodness of the Lord' (Ps 34:8)” Sister Maria Christine who has been a Dominican for over twenty-five years writes of the discernment process: “I too began by standing in those same shoes, bewildered and confused by the endless number of options available. . . While God calls each of us in a special way, he never sends a clearly written letter. Instead, he gives us free will anc copious options. If we hear the 'call of a vocation' we must take the initiative and begin the tedious and delicate process to discern the when, where, and how to respond appropriately.

“Vocation in Black and White” invites readers into the lives of these Dominican Nuns. It is wonderful reading for anyone attempting to discern their vocation in life; especially for young (or not so young) women considering religious life.