Book Review: The Spirituality of Fasting 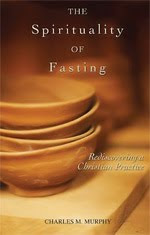 The Spirituality of Fasting: Rediscovering a Christian Practice

Back in 1966, Pope Paul VI issued the apostolic constitution on fast and abstinence, Poenitemini. The intent was "to rescue fasting from the legalism and minimalism into which it had fallen." The goal was not to remove fasting and penance and sacrifice from Catholic life, but rather to make it a personal choice rather than a command issued from above. Unfortunately, many Catholics took this to mean that these practices simply weren't necessary anymore. Nothing could be further from the truth. We are still called today to fast. Msgr. Charles M. Murphy has written "The Spirituality of Fasting" in order to renew "the practice of fast and abstinence based upon a deeper understanding of its role in our religious life."

In this relatively brief book (105 pages), Murphy explores the many reasons why fasting is important: it integrates prayer as being both of body and spirit, it is part of a long-standing tradition of Jewish and Christian practice, it helps to heal our relationship with God, and it helps us stand in solidarity with the poor and hungry. Overall his discussion of these points is extremely well-done. Based firmly in the witness of the Bible and pillars of the Christian faith, his argument that fasting is important and necessary is a strong one.

This being said, I offer one minor criticism. Murphy offers the example of Simone Weil in his chapter on standing in solidarity with others. He writes: "Simone Weil died on September 3, 1943, in exile from France in England, at the age of thirty-four, having starved herself to death. Suffering from tuberculosis, she refused in solidarity with her countrymen in Nazi-occupied France, to eat more than they were able to eat. She stands as a witness to social justice and to the significance and hazards of religious fasting." That word "hazards" indicates that Murphy did realize that Weil went too far. However, in the following paragraphs he really does hold her up as a role model. I respectfully disagree. Fasting to the detriment of one's body is not in keeping with the respect God wants us to have for our bodies.

Thankfully, in the chapter which offers practical ways to incorporate fasting into one's life, he advocates a much more healthy take on fasting. Following in the footsteps of St. Francis de Sales, he writes: "Your work and state in life are primary; fasting should not impede your ability to perform your duties , or endanger your health." I like that, unlike some other books on fasting that I have read, he acknowledges the worth of a partial fast - of simply giving up one meal, or cutting back on what one eats. He also agrees there is much to be said for other types of fasting and sacrifice, such as fast from media, or talking unnecessarily.

Murphy also makes the important fact that fasting is not a negative activity - it is a life-giving one. In truth, it enables us to feast. Just as one cannot appreciate light without the darkness, one can not truly appreciate feasting until one has experienced some lack. "We fast not just for fasting's sake, but to be able to feast, to live in the present with great pleasure and a joy that lasts."

"The Spirituality of Fasting" does much to encourage readers to make the practice of fasting part of their lives. It is good reading for Lent or for any time of the year!