Book Review: The Spirit of the Heart 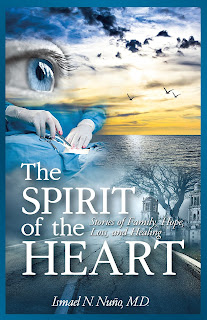 Very few people deal with life and death on such an intimate level as a heart surgeon. In The Spirit of the Heart, Dr. Ismael Nuῆo, one of the world’s best, reflects on his long career in heart surgery and the lessons he learned along the way. He “wrote this book to detail the stories that crossed my path and to honor the memories of the patients and their families that so greatly touched my life.” Trained at the Walter Reed Army Medical Center, he served as a Chief of Cardiac Surgery and as an Assistant Professor of Clinical Cardiothoracic Surgery. He also served in a MASH unit during Desert Storm. In addition, he has served as a consultant for such popular television programs as House M.D. and Grey’s Anatomy.

Nuῆo dedicated this book to his daughter Catherine who died in his arms at the age of eighteen. He also shares the stories of his mother and father who also died in his arms. Even a doctor of this caliber cannot always save those he loves. He shares both the pain and the lessons he has learned from their passing. He acknowledges that being a heart surgeon took a great time away from his family; the cost was indeed very high, but his love for them truly shines forth in these pages.

He also speaks of the difficulty in telling people that their loved ones have died and of the unique issues and blessings of organ donation. He also shares his struggles with faith, and the miracles that over the years have restored and enhanced it.

Nuῆo also shares his own experience of being a patient. He had a very dangerous bout of Hepatitis C after being stabbed with a needle. He also battles diabetes, the same disease that caused his mother’s death. His health problems forced him to retire and now he is trying to figure out a new life without being a heart surgeon.

Unless we are close to a doctor, people are much more likely to think of the patient and the patient’s point of view. This book offers a window into the doctor’s perspective and is extremely valuable in putting a human face and heart behind the white coat or surgical scrubs. It would be especially valuable for anyone interested in becoming a doctor.