After Suicide - A New Book on God's Mercy 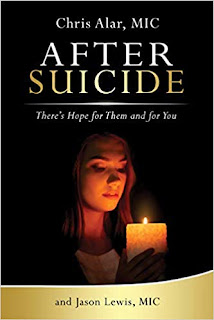 Suicide has become an epidemic in our society. According to the recent issue of Marian Helper Magazine, "there are more deaths by suicide every year in the world than deaths by all the wars and homicides combined."

Do those who take their own lives automatically lose their salvation? How can we help those who have lost a loved one to suicide? Addressing the hard issue of suicide simply and pastorally, Fr. Chris Alar, MIC, draws from the teaching of the Church, the message of Divine Mercy, and his own experience of losing his grandmother to suicide in order to offer readers two key forms of hope.

With co-author Jason Lewis, MIC, Fr. Chris reveals that there’s hope for the salvation of those who’ve died by their own hand, and there’s hope for the healing of those whom they’ve left
behind. This book is a must-read for all those trying to make sense out of such a difficult subject. Remarkably, the spiritual principles of healing and redemption apply not only to a loss from suicide, but by any means of death.

Alar and Lewis offer a fresh and compelling take on how to view prayer. Based on the fact that God is all-knowing (omniscient) and all-powerful (omnipotent), they explain how God’s eternal being “outside of time” enables one’s prayers to be effective to any point in time, including the past. This gives hope to all who have lost a loved one — that we can make a difference in the salvation of someone we love with our prayers and offerings, even years later, to assist them at the moment of their death. Supported by saints, theologians, and the liturgical prayers of the Church, these teachings, when applied, can result in amazing grace and the salvation of millions of souls who may have otherwise been lost.

Alar and Lewis have dared to deal with such a sensitive subject in a way few others have: from the perspective of Church teaching and from the aspect of spirituality, which many abandon in the midst of such a tragedy.
—Cardinal Soane Mafi, Bishop of Tonga

Here is the official trailer for the book:

Father Chris Alar, MIC, is a priest with the Marian Fathers of the Immaculate Conception at the National Shrine of The Divine Mercy. An international speaker
and regular host and guest on EWTN, he draws from his experience of being a suicide survivor and counsels many in this difficult ministry. He currently serves as “Fr. Joseph, MIC,” the director of the Association of Marian Helpers, and serves as the head of Marian Press in Stockbridge, Massachusetts.

Jason Lewis, MIC, is a member of the Marian Fathers of the Immaculate Conception and directs the Association’s Special Projects department. He has delivered theological reflections on EWTN’s 13-part series “The Cenacle of Divine Mercy II” and “EWTN Live.” He has made numerous radio appearances and delivered talks around the country on the Blessed Virgin Mary and the message of the Divine Mercy.

After Suicide is available through the Marian Helpers Website

Prayer for One Who Has Died by Suicide

God, lover of souls, you hold dear what you have made and spare all things, for they are yours.
Look gently on your servant [name],
and by the blood of the cross forgive his/her sins and failings.

Remember the faith of those who mourn and satisfy their longing for that day when all will be made new again in Christ, our Risen Lord who lives and reigns with you forever and ever.