Blog Tour: A Channel of Your Peace

Today I'm honored to be hosting the blog tour for new Catholic romance, A Channel of Your Peace. 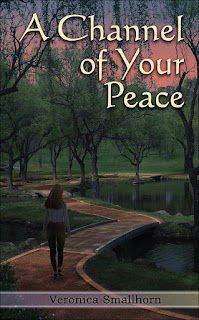 A Channel of Your Peace
By Veronica Smallhorn

Would a God who truly loves you allow things to get this bad?

Lapsed Catholic Erin Rafferty has the life she always wanted. Or at least she did, till the moment her fiancé of five years announces he's leaving her for another woman. Heartbroken and humiliated, a further devastating development leaves her wondering if she can ever live a normal life again.

Mark Ashcroft is a devout Catholic looking for an equally devout Catholic wife. A chance encounter with Erin leaves Mark completely captivated, yet deeply unsettled, knowing Erin is not in a place to accept him, nor is she the model Christian woman he’d hoped to start a life with.

A tentative friendship begins, and Erin finds herself questioning her long-held rejection of her faith, while Mark finds himself healing from memories of his own wounded past.

But as love grows, further tragedy in Erin’s life threatens her burgeoning faith and her hope for a future with Mark.

What follows is a difficult journey of love, surrender, trust, and faith in the ultimate knowledge that Christ is always in the midst of our sufferings.

Born and raised in Australia’s capital, Canberra, Veronica published her first work at age eleven when a Christmas poem she wrote was printed in the local newspaper.

Growing up, her two main focuses were her Catholic faith and music. After tireless efforts in these endeavours, Veronica is now resigned to being a deeply flawed though fairly devout Catholic, and a less-than-mediocre pianist.

She married her husband in 2005 and lived with him in his native Mexico for three years till they moved back to Canberra. After returning to Australia, Veronica ran her own one-woman resume and copywriting business for a few years till she decided she’d rather write fiction instead. The fruit of this labour is Veronica’s first novel A Channel of Your Peace, published by FQP on February 14, 2020.

Veronica and her husband Pablo have three beautiful children. She is a full-time homeschooling mum who enjoys reading and photography, hearing about her kids’ adventures in Minecraft, and spending some quiet time with her husband, preferably when they’re both awake.

Read more about Veronica at the FQP website:
https://www.fullquiverpublishing.com/about-authors/author-veronica-smallhorn/

Visit other stops on the blog tour: