Finding God in the Questions 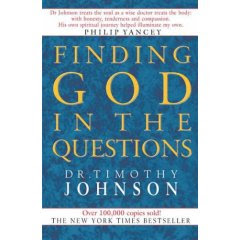 Dr. Timothy Johnson is best known as a medical expert for ABC news. What many people might not be aware of is that he is also a minister, having graduated from the seminary forty years ago. In “Finding God in the Questions,” he attempts to dig deeper into his own beliefs and how he has come to them. He is also attempting to integrate the spiritual and secular aspects of his life in a more meaningful way. Perhaps as a means of doing that, he is donating all his profits from the sale of this book to organizations that serve the poor and disadvantaged.

Section One deals with “Does God Exist?” Dr. Johnson relies heavily on scientific evidence to make his case for his belief in an omnipotent intelligent being. One often comes across those who believe that science and faith are incompatible. For those who believe, however, an examination of our physical world only serves to reinforce that belief. At times, his scientific inquiry can be somewhat intense for those without scientific backgrounds. To his credit, he does tell readers they can skip those few pages of his book without losing the point of his book.

Section Two focuses on “What is God Like?” Dr. Johnson offers a brief history of how the Bible came to be and then turns his attention to what one can learn about God by studying Jesus. He encourages people to read the Bible with fresh eyes, to simply sit down and read the four Gospels straight through as if it was your first experience with them (for some, it may very well be.) He believes many people will be surprised by what they find there. For example, Jesus says nothing against homosexuality, but preaches heavily against divorce. He speaks strongly against the accumulation of material possessions, yet many Christians seem to make this their prime goal in life. Also, “Jesus clearly shows more sympathy to the outcast and to the sinful than he does to the righteous and formally religious.” Johnson then goes on to discuss Jesus’ parables and miracles. Lastly, he investigates the Resurrection, coming to the conclusion that it was indeed a physical resurrection.

The last section is “What Difference Does it Make?” In this section, Johnson explores the way faith should manifest itself in our lives. He studies the Sermon on the Mount and the high standard it sets for our lives. He acknowledges that one must leave space for mystery, and that the questions will never be completely answered in this lifetime. Yet, he encourages readers to follow Jesus’ example, not because it will bring us “comfort and ease and even financial reward. The truth is that Jesus himself never painted such a rosy picture. . . . The only gift he promised for sure is that if we attempted to follow his teachings, we would be closer to the heart of God than we would otherwise be.”

Overall, Johnson’s inquiries will resonate with many. He brings his journalistic mind and medical knowledge as well as his theological background to investigate these questions. Time spent with “Finding God in the Questions” is put to good use.


Posted by Patrice Fagnant-MacArthur at Wednesday, May 09, 2007