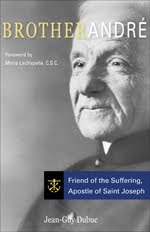 Brother Andre: Friend of the Suffering, Apostle of Saint Joseph

On February 19, 2010, Pope Benedict XVI announced that Blessed Brother Andre Bessette of Canada is scheduled to be canonized on October 17, 2010. Brother Andre was a humble porter at Notre Dame College in Quebec, Canada. He had very little formal education and wrote nothing, yet he became known internationally. At his death in 1937, more than one million people filed by his casket, acclaimed as a saint by the people long before the Church formally made that designation.

In “Brother Andre: Friend of the Suffering, Apostle of Saint Joseph,” Jean-Guy Dubac relates the life story of this simple man. He also includes a history of his family as well as background information on Saint Joseph’s Oratory which Brother Andre helped to build. Brother Andre was known for two main things – his devotion to St. Joseph and his ability to work cures in God’s name. Despite life-long physical illness, he lived an ascetic life – both eating and sleeping little. He spent many hours in prayer and was scrupulous in performing all his duties as a Brother of the Congregation of the Holy Cross.

One of the earliest cures attributed to Brother Andre’s intercession was of a young boy in the college infirmary. He asked the child, who was sick with fever, why he was being so lazy. When the boy responded that he was sick, Brother Andre told him to get up and go play with the other boys. When he did so, suddenly healed of his illness, it was to the astonishment of all. He was cured, with no explanation. Over the course of his lifetime, countless sick would come to seek Brother Andre’s aid. He greeted all with love, cured many, and directed all to seek St. Joseph’s help.

“Brother Andre: Friend of the Suffering, Apostle of Saint Joseph” offers an interesting, highly readable introduction to the life and times of one of the Catholic Church’s newest saints. From Brother Andre, one can learn much about patience, simplicity, and devotion to St. Joseph.