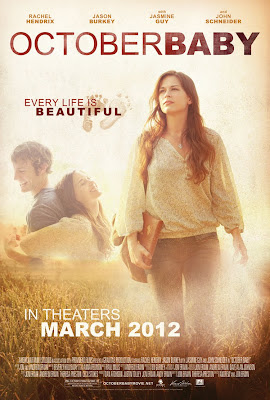 The National Right to Life News has a wonderful review of October Baby, which will be in theaters next month.

October Baby begins with Hannah (Rachel Hendrix) about to step on stage for her theatrical debut in college.

In the audience is her overly protective physician dad, Jacob (John Schneider); Jason, the boy who has been her closest friend since childhood (Jason Burkey); and Jason’s girlfriend. You know about 10 seconds in that Hannah, a 19-year-old freshman, is head over heels in love with Jason.

After just a couple of lines of dialogue, she collapses on stage. Following a series of medical tests, a family secret is revealed by the attending physician. All the many physical problems, including epilepsy and asthma, that Hannah has suffered from point to one source, he says: Hanna’s premature “traumatic” birth.

After an awkward, eyes-averting pause in one fell swoop Hannah first learns her parents are not her biological parents. She is angry she was never told. Then, worse yet for the emotionally fragile Hannah, she learns she was adopted ... after a failed abortion attempt!

Email ThisBlogThis!Share to TwitterShare to FacebookShare to Pinterest
Labels: Movies