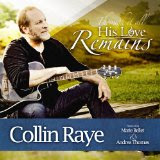 As a long-time fan of country music, I have known about Collin Raye for a long time. One of my favorite songs by him is I Think About You which should serve as a reminder to all men that those women they are objectifying are all "somebody's little girl." You wouldn't want someone looking at your daughter or younger sister like that; therefore, you shouldn't do it to someone else's daughter.

Catholic Digest has an article on Collin Raye in its April 2012 issue. He converted to Catholicism as a young man and has become a prominent speaker on pro-life issues, using his fame to support the cause. He goes to Mass and Confession even while on the road and states "It's the same Mass if you go to China, Bolivia, Kenya, but it's just in a different language. I really do feel at home anywhere I go and I don't mind walking right in and taking my spot and celebrating with my brethren."

His faith was recently tested when his 10 year old granddaughter Haley Marie was dying. He prayed and prayed for a miracle to no avail. Eventually, he came to accept that he was not the one in control. "I felt this feeling, this big hole in the sky opening up and God saying, 'Stop it. Just stop.' That was the moment it left me; the desire to try to fight this, to be in control. But not in dejection; I could feel it was Him saying, 'I've got this. Be still.' There was a strange comfort in that."

His most recent album, His Love Remains, is dedicated to Haley Marie and is a collection of Christian Classics.

Email ThisBlogThis!Share to TwitterShare to FacebookShare to Pinterest
Labels: Music