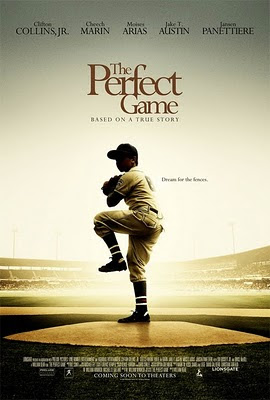 Review of “The Perfect Game”
Reviewed by Leticia Velasquez
http://catholicmediareview.blogspot.com

When is the last time you saw a great baseball movie; the kind which inspires you to go outside and play ball? How about a rags-to-riches story about the underdogs who made good despite bigotry, poverty, and family drama? When is the last time you saw a film which made your heart swell with pride about being a Latino or belonging to the Catholic Church? Would you believe there is a film out there like this? And that this film stars Cheech Marin, as Padre Esteban, a devout, old-fashioned priest?” This would take a miracle”, you say, well, in this film, Padre Esteban says “Sometimes God gives us the ability to make them.”

“The Perfect Game” is all about miracles, it is based the true story of the 1957 Little League World Series in which a rag-tag group of poor Mexican boys from the metal forge town of Monterrey cut a swathe of victory through the United States, to the admiration of American children and the chagrin of racists. Their meteoric rise to fame captured the attention of America and will capture your heart.

How did boys who didn’t speak English, had no field or fancy equipment, and weighed 50 pounds less on average than their opponents win so many games? The diminutive athletes have two secret weapons, their coach Cesar (Clifton Collins Jr.)A former employee of the St Louis Cardinals gave them each a role model in a Major League Baseball star, and their pastor, gave them his blessing. With the support of these men, hard work and heartfelt faith, the Monterrey Industrials went out to make history. The story follows the tight knit band of amigos from their simple homes in Mexico all the way to the Little League championship in Williamsport, PA. But their unlikely championship does more than impress the hometown folks, they managed to change hearts and inspire those they met. In Mexico, they bravely faced the scorn of the wealthy Mexico City team, yet the boys were not prepared for the harsh realities of segregation in the South of the 1950’s. Separate bathrooms were new to them, and it angered the boys when one of the American team members ate alone at the diner, because he was black. Soon the entire Monterrey team had moved over to share a meal with him. They forged a kinship with a black Protestant Pastor Clarence (John Cothran Jr) who pinch hit as team chaplain for Padre Esteban and they forged the common bond as underdogs who refuse to let hatred win.

The unique and memorable characters of the teammates are what make the film a winner. Jake T Austin has an incredible range of emotions as Angel Macias, the pitcher who strove to pitch a perfect game. Moises Arias, is adorable as Mario, the shortest teammate famous for his charm with the ladies. The feisty yet humble personalities of the little boys captured the hearts of the teenage audience who viewed the film with me. They recognized the actors from Disney Channel, and were charmed by their characters in the film, cheering them on as they wowed America onscreen.

When Cheech Marin was asked by Brian Kilmeade of Fox and Friends how it was that he played the role of Padre Esteban so convincingly, he recalled his childhood in the Church where he was an altar boy. “I imitated the priest”, he said. In his childhood, Cheech was also a big fan of the Monterrey Industrials; “I had a lot in common with them” he said. Perhaps that’s why he successfully embodied the Padre whose heartfelt prayer for a means of giving the boys hope began the story. Soon after his prayer, a baseball saying “Property of St Louis” was found by Angel Macias, next to an abandoned church, and the boys took it as a sign from God that they were meant to play baseball. They convinced Cesar to be their coach, cleared the abandoned church plaza for a field, and began to play ball. Soon the relationship between the team and down-on-his-luck Cesar took on the warmth of a friendship as the boys assisted his budding romance with the beautiful Maria (Patricia Manterola). Cesar, an unkempt drunk, finds himself spellbound in the presence of a Maria as the two meet at the market. The boys convince him that she can be found at Sunday Mass, where Cesar stands out like a sore thumb. This impresses Maria who invites him to dinner with her family. The involvement of the entire team in Maria and Cesar’s romance is part of the film’s charm, making it an excellent date flick.

The theme of father son relationship is central to the film, where the tension is thick between pitcher Angel Macias and his father, Umberto (Carlos Gomez). Umberto is angrily mourning the loss of Angel’s big brother Pedro. Angel somehow manages to excel as a pitcher, despite his father’s insistence that he will never fill Pedro’s shoes, and his utter lack of interest in his playing. Yet, in the end, the film underscores the crucial importance of a father’s approval to a growing son.

The authentically Mexican flair of the soundtrack and unique cinematography, blending newsreel footage of the actual team and the film itself, enhance the feeling of being witness to history.

This is a film which will be soon added to the family collection, to be played and replayed, along with director William Dear’s other baseball classic, “Angels in the Outfield”. Its not often that at film comes along which baseball is merely a vehicle to inspire hope and not an end in itself. The boy’s faith, dogged perseverance and winning personalities will make you laugh, cry and cheer for them. “The Perfect Game” is an example of what sports can do for a group of children with a good adult role model to guide them.

No nudity (little boys in underwear, a verbal reference to jock straps), no sexual innuendos, an appropriately negative portrayal of drunkenness and a scene where stealing is correctly called ‘sinful’ make this film an outstanding family film, suitable for all ages. I give this film my highest recommendation. If you only go to see one film this year, go see “The Perfect Game”.
at April 15, 2010

Email ThisBlogThis!Share to TwitterShare to FacebookShare to Pinterest
Labels: Movies