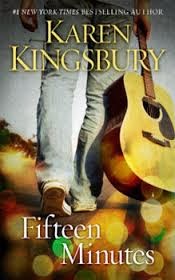 A new season of American Idol is underway which makes it the perfect time to read Fifteen Minutes by Karen Kingsbury. Zack Dylan is from Kentucky, an aspiring singer hoping to use his voice to make the money needed to save the family farm and tell the world about Jesus. He is headed off to audition for "Fifteen Minutes," a television singing competition. In doing so, he is leaving behind Reese, his longtime girlfriend whom he hopes to marry.

Chandra Olson is a former winner of "Fifteen Minutes" who now serves as a judge. Her sole reason for being there - to warn others about the price of fame.

Kelly Morgan is an aging beauty doing everything she can to fight the passage of time. Meanwhile her marriage has fallen apart and chasing fame has become an overriding obsession.

Karen Kingsbury has produced another great work of Christian fiction.  "Fifteen Minutes" is an enjoyable read - you will become deeply involved in these character's stories and want to know how it all turns out.