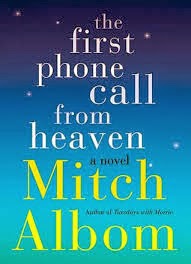 What if, somehow, it was possible to get a phone call from those who have died and are in now in heaven? Obviously, everything is possible with God and miracles can and do happen. That is the premise behind the latest work of fiction by Mitch Albom, bestselling author of “Tuesdays with Morrie” and “The Five People You Meet in Heaven.”

Tess Rafferty was the recipient of “The First Phone Call from Heaven.” She received  a call from her mother, who had passed away four years earlier. Several others in the small town of Coldwater, Michigan, would soon receive the same honor of hearing from a loved one no longer with them. The most vocal of these is Katherine Yellin, who received a call from her sister Diane. Katherine soon becomes the focus of a media frenzy and the small town of Coldwater becomes filled with tourists, pilgrims, and protesters.

Meanwhile, Sullivan Harding, a widower recently out of jail and attempting to rebuild his life with his young son, is angered by these calls and is determined to get to the root of who might be perpetrating this cruel hoax.

“The First Phone Call from Heaven” is an enjoyable read.  Albom skillfully interweaves the stories of the various people touched by these calls from the other side. He also crafts a suspenseful detective story. He also intersperses a bit of history, telling about Alexander Graham Bell and his quest to create the telephone.