Spending Time with the Waltons 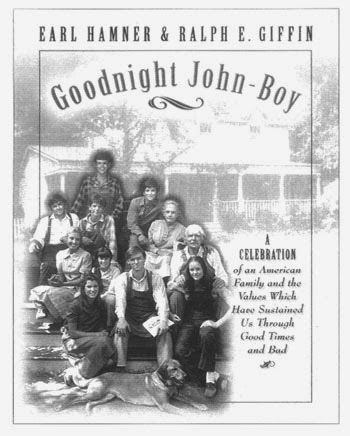 The Waltons television series, which focused on a family living in the Blueridge Mountains of Virginia during the depression and World War II, began before I was born and ended when I was a little girl, still too young to stay up at night to watch the primetime episodes. Yet, I had the great pleasure of enjoying many moments watching the show in reruns as I grew up. Even as an adult, I still enjoy watching a few episodes once in a while, reliving the old memories.

Goodnight John-Boy by Earl Hamner and Ralph Griffin is a look behind the scenes of this television classic. The show was based on Hamner's own family, where he was the oldest of eight children growing up in Schuyler, Virginia. Hamner shares many photographs of his own family as well as the story of his own writing career and how the Waltons series came to be.

The book then offers a short synopsis of every Waltons' episode as well as special reunion movies that came after the series ended. This section includes wonderful anecdotes from the actors, writers, and fans. The last portion of the book focuses on the Walton's Mountain Museum.

Goodnight John-Boy will be enjoyed by any Waltons' fan who wants to know more about the stories behind the show.