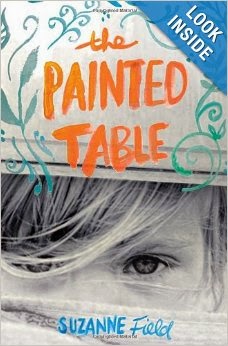 When I was in college, a favorite professor offered a literature class called “Mothers and Daughters.” As I read The Painted Table by Suzanne Field, I couldn’t help but think that this book would make an excellent addition to that class syllabus. Mother/daughter relationships are always complex. Add in the specter of mental illness and the strain can become unbearable. Such relationships are at the core of The Painted Table.

When the story begins, Joann is a seven-year-old girl living in North Dakota. While her siblings believe their mother, Clara, died as a result of childbirth, Joann discovers the truth – that their mother died in a hospital for the mentally ill.

Joann ultimately leaves home and builds a new life with her husband, Nels. They have two daughters, Sapphire (Saffee) and April. The story from that point on is told from both Joann and Saffee’s perspective. Joann struggles with her demons and Saffee tries her hardest to survive and distance herself from her mother as much as possible. Her greatest fear is that she will end up just like her.

In addition, Field explores the theme of objects in our lives and the meaning and weight that they can carry.  The Painted Table referred to in the title was originally made in 1858 in Norway and later traveled to America.  Joann would hide under it as a little girl. In many ways, it became her safe zone. Yet, it also carried horrible memories. When her older sister dies and the table makes its way to Joann, she is determined to exorcise its hold over her by covering it with paint over and over again.

For Saffee, the table holds nothing but horror, yet, she, too, ultimately ends up its owner. Can she break free of the table’s legacy and all it represents?

The Painted Table is a series of short vignettes in the lives of these two women, which cover a great deal of chronological time. The story is strongest in the latter half of the book when Saffee is an adult. It’s definitely worth sticking with the story to get to that point. The Painted Table offers much to think about and discuss, especially for those who have experienced mental illness in their families. It would make a great book club read; there is a short reading group guide included in the book for exactly that purpose.