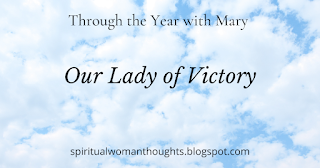 In 1620, the Austrian emperor Ferdinand II and Prince Maximilian of Bavaria were fighting Protestant armies in the White Mountains near Prague. Fr. Dominic of Jesus-Maria had found a picture of the nativity in the castle of Strakowicz, but the eyes of Mary and Joseph had been pierced by Calvinists.

The priest carried the picture to the military camp and urged the soldiers to restore Mary’s honor. When they won the battle the next day, they attributed it to Mary’s intercession and named the painting “Our Lady of Victory.” The original painting was destroyed by a file in 1883 and has been replaced by a copy.

The Church of Our Lady Victorious in Prague was built in 1611 for German Lutherans but was rebuilt after the Counter-Reformation from 1634-1669 by the Carmelite order. It is most famous for being the home of the statue of the Infant Jesus of Prague which was donated to the Carmelites in 1628.

Our Lady of Victory, help us to always honor you and to defend you against those who wish to treat you with disrespect.

Have you ever been accused of worshipping Mary or giving her honor that is only due to Jesus? How can you better prepare to defend Catholic’s veneration of Mary the next time that happens?

Email ThisBlogThis!Share to TwitterShare to FacebookShare to Pinterest
Labels: Mary, Through the Year with Mary

January 17 - Our Lady of Hope (Our Lady of Pontmain) - Pontmain, France

On January 17, 1871, Paris was under siege at the height of the Franco-Prussian war. In the small hamlet of Pontmain, twelve-year-old Eu... 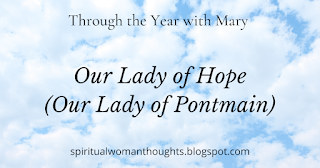