Book Review: An Angel to Watch Over Me 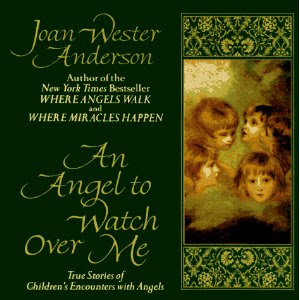 Angel to Watch Over Me

This past Saturday, Joan Wester Anderson contacted me by mistake on Facebook and recommended that I read her series on miracles. I had read and reviewed one in the series several years ago and enjoyed it greatly. Honestly, I wasn't even aware that there were several others. However, I firmly believed that this was no mere coincidence. I told her that I would look for the books and I did. My library system had three available. I requested all of them. They came in today - three books from three different libraries in record time. Yes, God apparently wants me reading these books now.

"An Angel to Watch Over Me" is subtitled "True Stories of Children's Encounters with Angels." As Anderson states, "Litte ones do appear to have a special bond with heaven. Perhaps it's because they haven't yet experienced a clear division between the two worlds and, for a little while, can be part of each." In this book, she shares several stories of angelic intervention. One young girl's angel came to visit her two nights in a row in a "dress rehearsal" so that on the third night she wouldn't be scared and would know to follow when he came to lead her out of her burning home. Others were miraculously saved from accidents. One came to comfort a child when he was convinced his father was dead (in reality, he was away on a military trip). Another came to comfort a young girl whose grandmother had just died. Others cleaned up a Church. One was saved from drowning. Two children actually witnessed a battle between angels and demons in the room where they were staying. All of the stories are amazing and will help increase one's faith in angels. Now that I have read the book, I've decided to read one story a night to my children. We pray to their guardian angels morning and night but I hope that this will give them a greater appreciation of them and help them to realize that they can always count on them.

On a personal note, in the back of the book are songs and prayers to angels. Among them was a song called "All Night, All Day." I sang that song on Christmas Eve at Mass the Christmas I was turning four years old. My mother and sister worked and worked with me until I had it down perfect. All these years later I can still remember it, but this was the first time I've ever seen it since. It is a very simple song and it was perfect for a small child, but the words hold true for all of us whether we are one day or one hundred years old. I'll share the words with you here:

All Night, All Day

Truly amazing how God works! I am always complaining about how slow I am to catch on to anything involving the Internet etc, and I dID contact you by mistake---the message was meant for someone who wanted to know how many books I had written. But when God wants a connection, He gets one!
Thank you for being a reviewer (!) and for choosing one of my books. Your thought about reading a story each night is something that a lot of people do, and it is also used as a "reward" in CCD classes, the teachers tell me: if the kids behave during class, they get to hear a story!
Thanks again!