"Murder in the Vatican: The Church Mysteries of Sherlock Holmes" 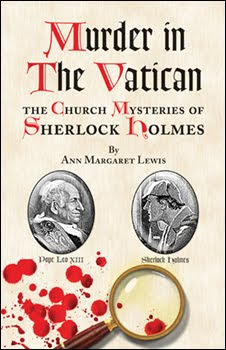 I haven't read this one, but it looks like a great book. It is also a recipient of the Catholic Writer's Guild Seal of Approval.

Murder in the Vatican: The Church Mysteries of Sherlock Holmes

Follow the great detective as he investigates three baffling cases at the "express desire of his Holiness, the Pope." Stories include "The Death of Cardinal Tosca," "The Vatican Cameos," and "The Second Coptic Patriarch." You'll encounter baffling crimes, rich, historical settings, and a fateful encounter with Father Brown! These thrilling tales of murder and intrigue vividly bring to life three of Watson's "untold tales!"

When the famous Father Brown is imprisoned for the murder of a Coptic clerk, Brown's ex-criminal friend Flambeau seeks the help of Sherlock Holmes to set him free. The case is a tangled problem that spans from the hearth of a simple family to the upper-echelons of the Church of Rome.

Sherlock Holmes helps Pope Leo XIII recover a rare collection of ancient Roman cameos that has vanished en route to Queen Victoria. A gift with political implications, their loss could cost English Catholics their much-needed cathedral in London. Holmes travels to Rome to locate the stolen baubles, but when this theft quickly turns to murder, Holmes and the Holy Father realize this case is more treacherous than they imagined. Introduced and concluded by Dr. Watson, the bulk of the tale is told in the fatherly voice of the erudite and prolific Pope Leo XIII.

Pope Leo requests the aid of Sherlock Holmes to investigate the sudden and mysterious death of a member of his curia. Holmes and his friend Dr. Watson discover that the pen is definitely mightier than the sword in the hands of a murderous artisan whose intended victim is the Pope himself.

To order, visit http://www.wessexpress.com/html/vatican.html
at August 30, 2010