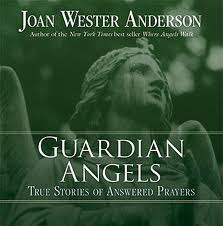 Sometimes I have to laugh at myself. As I was reading this book, I felt that the stories were very familiar and I had the sneaking suspicion that I had, in fact, read the book before. Sure enough, after searching my own blog, I found that I had reviewed it way back in January 2007. You can read that review here: http://spiritualwomanthoughts.blogspot.com/2007/01/guardian-angels.html. But three and a half years is a long time, and this is a book well worth a second look.

is a testament to the power of prayer and the existence of miracles. The true-life stories contained within its pages tell of angels and people acting as angels. They tell of being repaid for kindnesses rendered in ways people couldn't even imagine. There is a special section on Christmas miracles. These stories demonstrate that God does care about us and sometimes intervenes in our lives in amazing ways.

Perhaps because of my name and the fact that I am a writer, the story that touched me most was "Patricia's Valentine." Judy Kimball was falling apart. Her husband had recently asked her for a divorce. She hadn't yet told anyone and was doing all she could just to function and to continue in her role as a mom. She had started taking a Wednesday night class in creative writing, but she figured that she would now need to leave that behind as well. On a trip to the drugstore to buy Valentines for her children, a woman called out her name. She turned and saw a woman named Patricia from her writing class. She had never really talked to her before, but soon she found herself pouring out her heart to this relative stranger. When she was done talking, Patricia handed Judy an angel pin and told her "God hasn't forgotten you, Judy. He just has other plans for you. You will survive this. Trust me."

Judy found the courage to attend the writing class the following week and hoped to see Patricia. But, she was not there. Nor was she there in the coming weeks. Finally, Judy asked the teacher about her, but the teacher had no memory of her and no "Patricia" was listed on her class roster.

For this story, and many more beautiful stories such as this, please read Guardian Angels: True Stories of Answered Prayers

. It will warm your heart and encourage your faith.

Email ThisBlogThis!Share to TwitterShare to FacebookShare to Pinterest
Labels: Angels